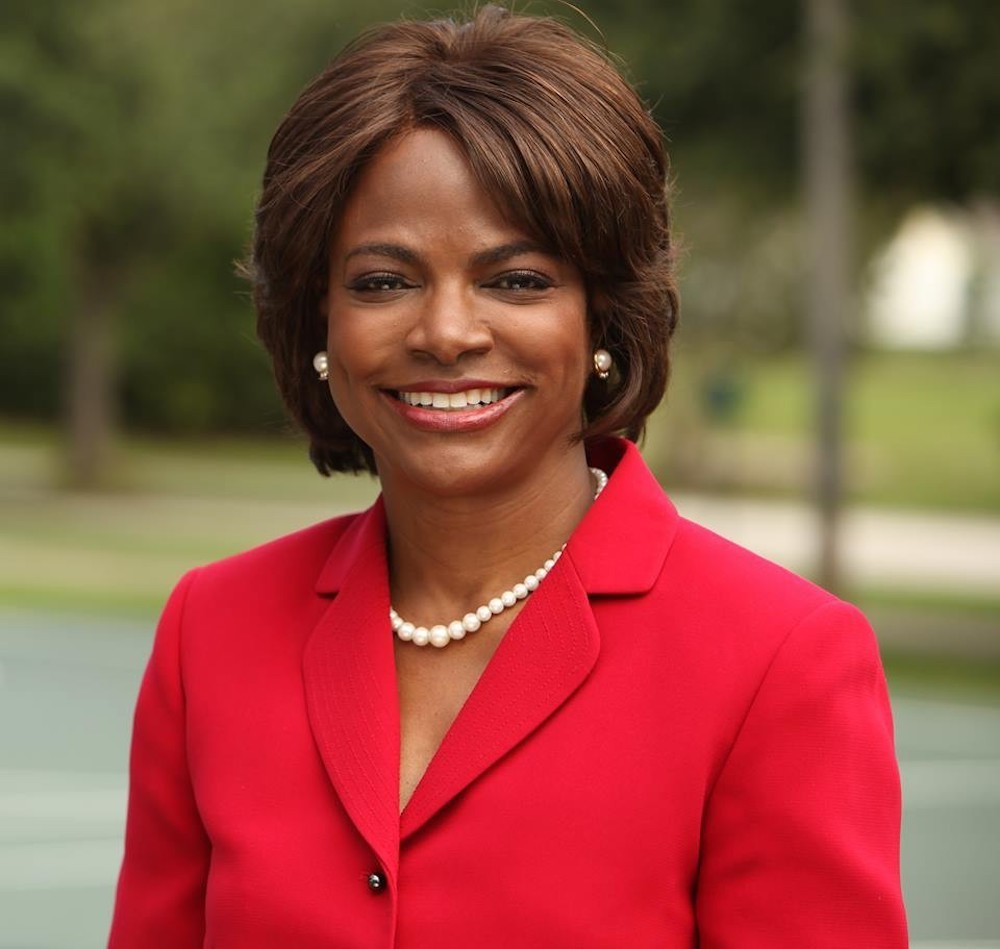 Representative Val Demings, Democratic Congresswoman from Central Florida, is one of the finalists for Joe Biden’s pick of a running mate for the 2020 Presidential Election.  She has been in Congress for four years, is from a crucial swing state (Florida), and was the first Black woman to serve as chief of police in Orlando.  All pluses especially in this time of Black Lives Matter and police reform.  NBC News has done an analysis and points out that a former policewoman regardless of color might have problems with Black voters.  Below is the entire analysis.  If you are at all interested in the Democratic ticket for the November election, there are a lot of insights here.

How Rep. Val Demings could help Joe Biden ‘meet the moment’ as his vice presidential pick!

“It’s almost laughable to hear the president defend law enforcement now,” said Rep. Val Demings on a recent Democratic conference call. “This is the president, remember how well I know, who considers himself above the law and everyone else beneath it.”

With these two lines, the Florida Democrat unwittingly captured both why she belongs on Joe Biden’s vice presidential shortlist, and why she could be a risky choice for a running mate.

The first Black woman to serve as chief of police in Orlando, Florida, Demings was elected to Congress in 2016 to represent the Sunshine State’s 10th district, which includes parts of the city.

But today, with the nation at a political and cultural crossroads, Demings seems like a politician who was made for this moment. Weeks of nationwide protests against police killings of unarmed Black people are forcing Americans to confront the reality of systemic racism. Meanwhile, in cities and towns across the country, ordinary people are asking tough questions about the fundamental purpose of law enforcement.

Demings, 63, can offer an uncommon insight into both of these national debates. She also hails from the swingiest swing state, Florida, a state Trump won in 2016, but which Democrats hope to retake in November. Indeed, recent polling suggests that Biden has a lead over Trump in the state.

Demings’ unique resume and life experience, along with the talent for oratory she revealed last winter while serving as an impeachment manager in Trump’s trial, make the second-term congresswoman seem like an ideal running mate for Biden.

But Demings’ greatest strength is also her greatest weakness.

During her four-year tenure as chief of police in Orlando from 2007-2011, critics say Demings led a police force whose officers used excessive force, often on young, Black suspects. This has led some progressive Democrats to argue that, as a former cop, Demings cannot be trusted to help fix the national policing system.

“Her biggest obstacle as a running mate is her police background,” said Sharon Austin, a professor of political science at the University of Florida.

“That automatically is going to turn off a group of voters who will just never vote for a police officer. They see her as part of the establishment, part of the problem,” Austin said in an interview with CNBC.

Yet Austin also noted that Demings “has a very positive reputation here in Florida,” having won her congressional race in 2016 by a double digit margin, and running unopposed in 2018.

Today, Demings faces stiff competition in the 2020 veepstakes, where she is on the short list. Biden has already pledged to choose a woman as his running mate, and he is under pressure to choose a woman of color.

Susan Rice, a Black woman who served as President Barack Obama’s national security advisor, is also reportedly in the running, as is Rep. Karen Bass of California, who chairs the Congressional Black Caucus.

“Sure, they’ll find some police brutality in Orlando, and that’ll be her albatross,” Morgan said of Demings. “Her greatest strength is, ‘I was a police chief who prosecuted the president.’ But the way opposition research works, is they make your greatest strength into your greatest weakness. Look at John Kerry. He was a war hero, and look what they did to him.”

Morgan was referring to the infamous 2004 “Swift Boat Veterans for Truth” campaign, a conservative effort to smear the Vietnam War record of then-Sen. Kerry, the Democratic nominee.

But while the Swift Boat claims were later discredited, the Orlando Police Department has long faced criticism for fostering a culture of impunity, including under Demings’ leadership.

Demings knows this. “Looking for a negative story in a police department is like looking for a prayer at church,” she wrote in a 2008 op-ed defending the Orlando police after the publication of a damning expose.

But acknowledging that there are bad stories out there, and successfully defending your record in a bare-knuckle fight for the White House, are two different things.

“The question is whether she’ll be able to talk about her law enforcement background in a way that’s going to meet the moment,” said Aimee Allison, founder and president of She the People, a national organization dedicated to elevating the political power of women of color.

“Any vice presidential nominee, including Val Demings, will need to communicate a policy vision on racial justice that’s comprehensive, and that pushes the boundaries of traditional models,” Allison said. “So I look forward to learning more about her.”

Born in 1957, during the waning years of the Jim Crow South, Demings grew up poor in Jacksonville, Florida, one of seven children in a two-room house. Her father worked as a janitor, and her mother cleaned houses.

As a young police officer, Demings met Jerry Demings, and the two were married in 1988. They have three children. Jerry Demings also served as chief of police in Orlando from 1998-2002, retiring five years before his wife was named chief. Today, Jerry Demings is the mayor of Orange County, Florida, and one half of a power couple in the state’s political scene.

To hear Demings tell it, her career has been driven by a desire to share the opportunities she’s had with others.

“I know what discrimination feels like. I know what racism feels like, because I have been subjected to it,” Demings said this week on CNN. “I chose jobs where I could work directly with people to help improve their quality of life. As a social worker, as a career law enforcement officer, chief of police, and now a member of Congress,” she said.

Demings was not available for an interview Wednesday with CNBC, her office said. But in response to a question about whether she has a policy vision for racial justice, a spokeswoman for Demings pointed to the former social worker’s life story.

“She had access to opportunities that she wants everyone to have, like equal access to health and mental health care, education and economic opportunities,” said the spokeswoman, Kate Coyne McCoy.

But this statement offers a window into another factor weighing on Demings’ qualifications as a running mate for Biden: After four years in the House, Demings has yet to be the public face of major legislation, something that her chief rivals for the VP nod, Harris and Warren, have both done in the Senate.

This is largely due to the mechanics of the two chambers – with only 100 senators total, each senator spends a lot more time in the spotlight than the average House member, who is one of 435.

But it also reflects the fact that, save for issues related to criminal justice and policing, Demings has so far staked out relatively few defined policy positions.

On issues ranging from foreign policy, veterans affairs and big business regulation, to trade, technology and health care, Demings’ positions amount to little more than a few votes in the House and a few bills she co-sponsored.

Lacking a full policy portfolio likely puts Demings at a disadvantage in the vice presidential search, where insiders say Biden and his team are prioritizing candidates’ readiness to assume the presidency at a moment’s notice.

“The calculus that [former senator] Chris Dodd is doing, and [longtime Biden aide] Ted Kaufman, the people who are the closest to Biden, I think the main thing they’re thinking is, ‘ready on day one,’” said Morgan, the Florida Biden campaign bundler. “So that helps Warren and that helps Harris.”

But Demings still has an ace up her sleeve: Florida, her home state, is the crown jewel of the Electoral College.

In the last 20 years, no presidential nominee of either party has won the White House without winning Florida’s 29 electoral votes. But in those same 20 years, no one has won Florida by more than 3 percentage points, making every last vote a nominee secures in the Sunshine State both hard won and precious.

If by putting Demings on the Democratic ticket alongside Biden, it could help deliver for Democrats enough of these precious Florida votes to win the state, then perhaps this alone would be worth the risks of selecting a former cop.

“The battleground states like Florida that Biden could win are probably where he should put his energies,” said Austin, of the University of Florida. “He needs to win back states that Democrats lost in 2016, and running with [California Sen.] Harris might not help there, where Demings could.”

“It doesn’t matter what anyone says about Harris being a strong running mate because she’s a senator, the fact is, California is won” for Democrats, said Morgan, the Florida lawyer.

Hanging over all these deliberations is the knowledge that Trump won Florida in 2016 by 1.2 percentage points, just over 100,000 votes. In 2012, Obama won the state by less than 1 point.

And while Demings’ law enforcement career might not bode well with certain parts of the national Democratic electorate, in her home state, the actual work Demings did every day was very community focused, said Susan McManus, a professor emeritus at the University of Florida and an expert in the politics of the state.

“One of the big differences between a police chief like Demings and a prosecutor like Kamala Harris is that as a police chief, you’re really out among the community, doing outreach, listening to residents and helping people in very tangible ways,” said McManus.

“A prosecutor, on the other hand, is often making decisions from afar, and may only really interact with the community members in court.”

McManus also warned against looking at Florida through a binary Black and White lens, or even a Black, White and Hispanic lens.

“The fabric of Florida is very complex from a racial perspective and an age perspective,” she said. “Within each of the traditional racial categories, there’s a real diversity of political views, influenced by where people’s families originated, what religious group they belong to, and whether or not their communities are economically stable.”

“Then within all these nuanced groups, you have younger voters who might be more progressive, and their parents, who might be more conservative. And this is before you even factor in the retirees, who vote in higher numbers relative to their population than other groups,” said McManus.

Taken together, Florida’s diverse voting blocs, coupled with its razor-thin margins, said McManus, “mean that every group can say to the candidate, ‘without us, you’ll lose.’ That’s why figuring out a winning strategy in Florida is so incredibly challenging.”

But with so many diverse voter groups in Florida, could Demings really make a difference to a Biden ticket there? Or are there simply too many variables influencing the electorate to justify a “hometown hero” vice presidential pick?

McManus believes the biggest factor in choosing a successful vice president for Biden isn’t the geography, or even the ethnicity of his running mate.

“The real question is, can whomever it is reconstruct the passion voters felt when they voted for Obama,” she said. “He’s got to get a feeling of energy into his ticket.”