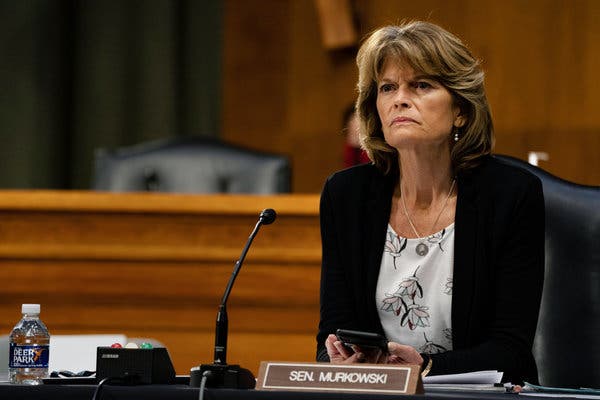 Senator Lisa Murkowski, Republican of Alaska, said yesterday that she endorsed the scathing criticism of President Trump’s leadership by Jim Mattis, the former secretary of defense, and was grappling with whether to support the president in the coming election.

Ms. Murkowski said the critique by Mr. Mattis, in which he said that Mr. Trump had divided the nation and failed to lead amid growing protests across the country, was “necessary and overdue,” and might prod other Republicans to go public with their private concerns about the president.

“I was really thankful,” she told reporters on Capitol Hill. “I thought General Mattis’s words were true and honest and necessary and overdue.”

The comments by Ms. Murkowski, one of the few Republicans in Congress who have been willing to break with the president on occasion, suggested that Mr. Trump’s response to nationwide unrest over police brutality and racial discrimination had emboldened at least some members of his party to speak out against him. While many Republicans privately regard the president’s conduct with distaste and even alarm, few have been willing to publicly air those concerns.

In apparent response to Ms. Murkowski’s comments, Mr. Trump vowed Thursday evening to campaign against her in two years, when her term ends, pointing to her votes against legislation that would repeal the Affordable Care Act and the confirmation of Judge Brett M. Kavanaugh to the Supreme Court. (While Ms. Murkowski said she did not support the confirmation, her vote was recorded as “present” as part of an agreement with a colleague who missed the vote.)

“Get any candidate ready, good or bad, I don’t care, I’m endorsing,” Mr. Trump wrote on Twitter. “If you have a pulse, I’m with you!”

With a pandemic raging and protests exposing a sense of anguish about the treatment of black Americans, we need more more Republicans willing to voice their differences with Trump.   Don’t be afraid of the bully!