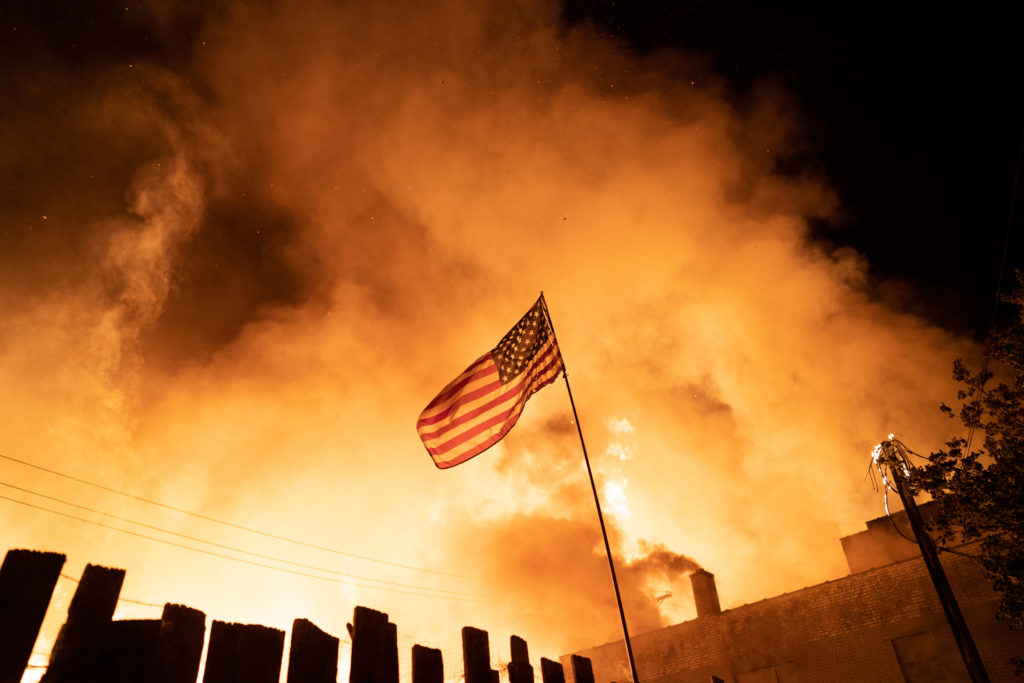 The last several months in America have been surreal and have felt like the opening scenes in a film about a nation being ripped apart. First the corona virus pandemic hit. The national economy froze and unemployment soared; one in four American workers has applied for unemployment benefits since March. Lines of cars stretched for miles at food banks. Heavily armed lockdown protesters demonstrated across the country; in Michigan, they forced the Capitol to close and legislators to cancel their session. Nationwide, more than  100,000 people died of a disease almost no one had heard of last year. New York Times columnist, Michelle Goldberg, analyzes the situation and questions whether we are a nation in free fall.  Here is an excerpt.

“Then, this week, a Minneapolis police officer was filmed kneeling on the neck of a black man named George Floyd. As the life went out of him, Floyd pleaded that he couldn’t breathe, echoing the last words of Eric Garner, whose 2014 death at the hands of New York policemen helped catalyze the Black Lives Matter movement. Floyd’s death came only days after three Georgia men were arrested on charges of pursuing and killing a young black man, Ahmaud Arbery, whom they saw out running. A prosecutor had initially declined to charge the men on the grounds that their actions were legal under the state’s self-defense laws.

In Minneapolis protesters poured into the streets, where they met a far harsher police response than anything faced by the country’s gun-toting anti-lockdown activists. On Wednesday night, peaceful demonstrations turned into riots, and on Thursday Minnesota’s governor called in the National Guard.

For a moment, it seemed as if the blithe brutality of Floyd’s death might check the worst impulses of the president and his Blue Lives Matter supporters. The authorities were forced to act: All four of the policemen involved were fired, police chiefs across the country condemned them and William Barr’s Justice Department promised a federal investigation that would be a “top priority.” Even Donald Trump, who has encouraged police brutality in the past, described what happened to Floyd as a “very, very bad thing.”

But on Thursday night, after a county prosecutor said his office was still determining if the four policemen had committed a crime, the uprising in Minneapolis was reignited, and furious people burned a police precinct. (One of the officers was arrested and charged with third-degree murder on Friday.) On Twitter, an addled Trump threatened military violence against those he called “THUGS,” writing, “When the looting starts, the shooting starts.”

Whether Trump knew it or not, he was quoting a racist phrase from the 1960s used by George Wallace, among others. The president later tried to tamp down outrage by saying he was just warning of danger — the Trump campaign has hoped, after all, to peel off some black voters from the Democrats — but his meaning was obvious enough. This is the same president who on Thursday tweeted out a video of a supporter saying, “The only good Democrat is a dead Democrat.”

The Trump presidency has been marked by shocking spasms of right-wing violence: the white nationalist riot in Charlottesville, Va., the massacre at the Tree of Life synagogue in Pittsburgh, the mass shooting targeting Latinos in El Paso. But even as the country has simmered and seethed, there hasn’t been widespread disorder. Now, though, we might be at the start of a long, hot summer of civil unrest.

So many things make America combustible right now: mass unemployment, a pandemic that’s laid bare murderous health and economic inequalities, teenagers with little to do, police violence, right-wingers itching for a second civil war and a president eager to pour gasoline on every fire. “I think we’re indeed in a moment where things are going to get a lot more tense before they get more peaceful,” said the University of Michigan historian Heather Ann Thompson, who won the Pulitzer Prize for her 2016 book “Blood in the Water: The Attica Prison Uprising of 1971 and Its Legacy.”

Already the Minneapolis protests have spread to other cities. On Thursday night, someone fired a gun near a crowd of demonstrators in Denver and more than 40 people were arrested in New York City. Seven people were shot at a protest in Louisville, Ky., where crowds had turned out to demand justice for Breonna Taylor, an unarmed black woman who was shot by police in her own apartment in March.

These demonstrations were sparked by specific instances of police violence, but they also take place in a context of widespread health and economic devastation that’s been disproportionately borne by people of color, especially those who are poor. “Sociologists have studied collective behavior, urban unrest for decades, and I think it’s safe to say that the consensus view is that it’s never just about a precipitating incident that resulted in the unrest,” Darnell Hunt, dean of social sciences at U.C.L.A., told me. “It’s always a collection of factors that make the situation ripe for collective behavior, unrest and mobilization.”

Keith Ellison, Minnesota’s progressive attorney general, told me that lately, when he goes out walking or running in Minneapolis, he feels a “coiled sort of anxiousness ready to spring.” Many people, he said, “have been cooped up for two months, and so now they’re in a different space and a different place. They’re restless. Some of them have been unemployed, some of them don’t have rent money, and they’re angry, they’re frustrated.”

That frustration is likely to build, because the economic ruin from the pandemic is just beginning. In some states, moratoriums on evictions have ended or will soon. The expanded unemployment benefits passed by Congress as part of the CARES Act run out at the end of July. State budgets have been ravaged, and Republicans in Washington have so far refused to come to states’ aid, meaning we’ll likely soon see painful cutbacks in public jobs and services.

“Where people are broke, and there doesn’t appear to be any assistance, there’s no leadership, there’s no clarity about what is going to happen, this creates the conditions for anger, rage, desperation and hopelessness, which can be a very volatile combination,” said Keeanga-Yamahtta Taylor, an assistant professor of African-American studies at Princeton. “I would not at all be surprised to see this kind of reaction elsewhere over the course of the next several months.”

As I write this the lyrics from a Buffalo Springfield song from 1967 comes to mind:

I think it’s time we stop, children, what’s that sound
Everybody look what’s going down.”