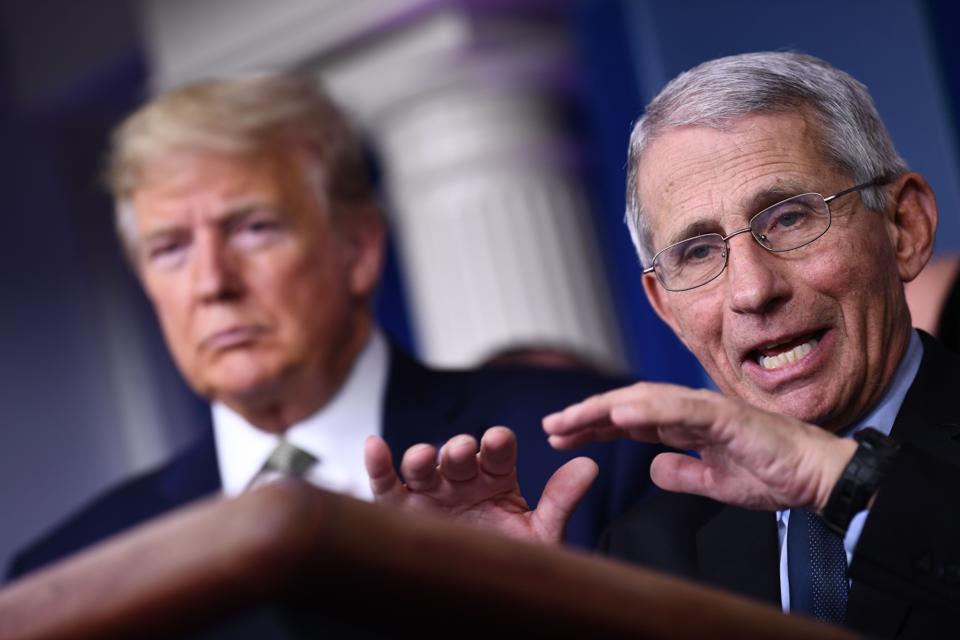 Earlier this week, Anthony Fauci caused quite a stir when parts of an interview that appeared in Science where released. His candid comments about President Trump and the White House had many guessing that his days were numbered. Below is the entire interview. He tells it like it is.

Anthony Fauci, who to many watching the now-regular White House press briefings on the pandemic has become the scientific voice of reason about how to respond to the new coronavirus, runs from place to place in normal times and works long hours. Now, the director of National Institute of Allergy and Infectious Diseases has even less time to sleep and travels at warp speed, typically racing daily from his office north of Washington, D.C., to his home in the capital, and then to the White House to gather with the Coronavirus Task Force in the Situation Room. He then usually flanks President Donald Trump addressing the media—and when he isn’t there, concerned tweets begin immediately. Shortly before he planned to head to the White House for a task force meeting today, he phoned ScienceInsider for a speedy chat. This interview has been edited for brevity and clarity.

Q: The first question everyone has is how are you?

A: Well, I’m sort of exhausted. But other than that, I’m good. I mean, I’m not, to my knowledge, coronavirus infected. To my knowledge, I haven’t been fired [laughs].

How are you managing to not get fired?

A: Well, that’s pretty interesting because to [Trump’s] credit, even though we disagree on some things, he listens. He goes his own way. He has his own style. But on substantive issues, he does listen to what I say.

Q: You’ve been in press conferences where things are happening that you disagree with, is that fair to say?

A: Well, I don’t disagree in the substance. It is expressed in a way that I would not express it, because it could lead to some misunderstanding about what the facts are about a given subject.

Q: You stood nearby while President Trump was in the Rose Garden shaking hands with people. You’re a doctor. You must have had a reaction like, “Sir, please don’t do that.”

A: Yes, I say that to the task force. I say that to the staff. We should not be doing that. Not only that—we should be physically separating a bit more on those press conferences. To his credit, the vice president [Mike Pence] is really pushing for physical separation of the task force [during meetings]. He keeps people out of the room—as soon as the room gets like more than 10 people or so, it’s, “Out, everybody else out, go to a different room.” So with regard to the task force, the vice president is really a bear in making sure that we don’t crowd 30 people into the Situation Room, which is always crowded. So, he’s definitely adhering to that. The situation on stage [for the press briefings] is a bit more problematic. I keep saying, “Is there any way we can get a virtual press conference?” Thus far, no. But when you’re dealing with the White House, sometimes you have to say things one, two, three, four times, and then it happens. So, I’m going to keep pushing.

A: I know that. I’m trying my best. I cannot do the impossible.

Q: What about the travel restrictions? Trump keeps saying that the travel ban for China, which began 2 February, had a big impact on slowing the spread of the virus to the United States and that he wishes China would have told us 3 to 4 months earlier and that they were “very secretive.” (China did not immediately reveal the discovery of a new coronavirus in late December 2019, but by 10 January, Chinese researchers made the sequence of the virus public.) It just doesn’t comport with facts.

Q: Most everyone thinks that you’re doing a remarkable job, but you’re standing there as the representative of truth and facts, and things are being said that aren’t true and aren’t factual.

A: The way it happened is that after he made that statement [suggesting China could have revealed the discovery of a new coronavirus 3 to 4 months earlier], I told the appropriate people, it doesn’t comport, because 2 or 3 months earlier would have been September. The next time they sit down with him and talk about what he’s going to say, they will say, “By the way, Mr. President, be careful about this and don’t say that.” But I can’t jump in front of the microphone and push him down. OK, he said it. Let’s try and get it corrected for the next time.

Q: You have not said China virus. (Trump frequently calls the cause of the spreading illness known as coronavirus disease 2019 a “China virus” or a “Chinese virus.”)

Q: And you never will, will you?

Q: I’m curious about some things that aren’t happening on a national scale. One is, why are shelter in place orders happening state by state? Why are we doing this sequentially? Is that a mistake?

A: No, I don’t think we could say it’s a mistake or not a mistake. There is a discussion and a delicate balance about what’s the overall impact of shutting everything down completely for an indefinite period of time. So, there’s a compromise. If you knock down the economy completely and disrupt infrastructure, you may be causing health issues, unintended consequences, for people who need to be able to get to places and can’t. You do the best you can. I’ve emphasized very emphatically at every press conference, that everybody in the country, at a minimum, should be following the fundamental guidelines. Elderly, stay out of society in self isolation. Don’t go to work if you don’t have to. Yada, yada, yada. No bars, no restaurants, no nothing. Only essential services. When you get a place like New York or Washington or California, you have got to ratchet it up. But it is felt—and it isn’t me only speaking, it’s a bunch of people who make the decisions—that if you lock down everything now, you’re going to crash the whole society. So, you do what you can do, as best as you can. Do as much physical separation as you can and ratchet it up at the places you know are at highest risk.

Q: But I heard a guy say, if you think you’re doing too much, you’re probably doing the right amount.

Q: I know it’s you. The “15 Days to Slow the Spread” campaign doesn’t mention religious gatherings. I know Pence mentioned them yesterday. But why aren’t they on the 15 days recommendations? All these other places are mentioned.

A: It was implied in no crowds of more than 10 people. But you’re right, crowds in church are important and every time I get a chance to say it, I mention it. I can’t really criticize them strongly for that at all. When you say less than 10, it makes common sense that it involves the church. I say it publicly and even the vice president has said it publicly.

Q: What happens before each press conference? What do you do as a group?

A: We’re in the task force. We sit down for an hour and a half, go over all the issues on the agenda. And then we proceed from there to an anteroom right in front of the Oval Office to talk about what are going to be the messages, what are the kind of things we’re going to want to emphasize? Then we go in to see the president, we present [our consensus] to him and somebody writes a speech. Then he gets up and ad libs on his speech. And then we’re up there to try and answer questions.

Q: At Friday’s press conference, you put your hands over your face when Trump referred to the “deep State Department” (a popular conspiracy theory). It’s even become an internet meme. Have you been criticized for what you did?

Q: We’ve seen creative ideas about how to respond in other countries that we aren’t adopting. China uses thermometers at supermarkets before letting people in. Should we be considering that?

A: Yes, of course. I think the logistics of that have to be worked out. That was discussed. All these things are discussed. Not all of them are implemented. This is something that should be considered. I will bring it up at the next task force meeting and see whether there’s some sort of a logistical, bureaucratic reason why it can’t be done. The rationale for doing it is at least worth serious consideration.

Q: Big picture: We’ve had all this pandemic preparedness. Why did this fail? What went wrong?

A: I think we’ll have to wait until it is over and we look back before we can answer that. It’s almost like the fog of war. After the war is over, you then look back and say, “Wow, this plan, as great as it was, didn’t quite work once they started throwing hand grenades at us.” It really is similar to that. Obviously, testing [for the new coronavirus] is one clear issue that needs to be relooked at. Why were we not able to mobilize on a broader scale? But I don’t think we can do that right now. I think it’s premature. We really need to look forward.

Q: Right now, why do we have a travel ban on visitors from China when there are few cases in China other than imported cases? What’s the logic?

A: I’m sorry. I was just looking at two text messages, one from a governor and one from the White House. I gotta get off.