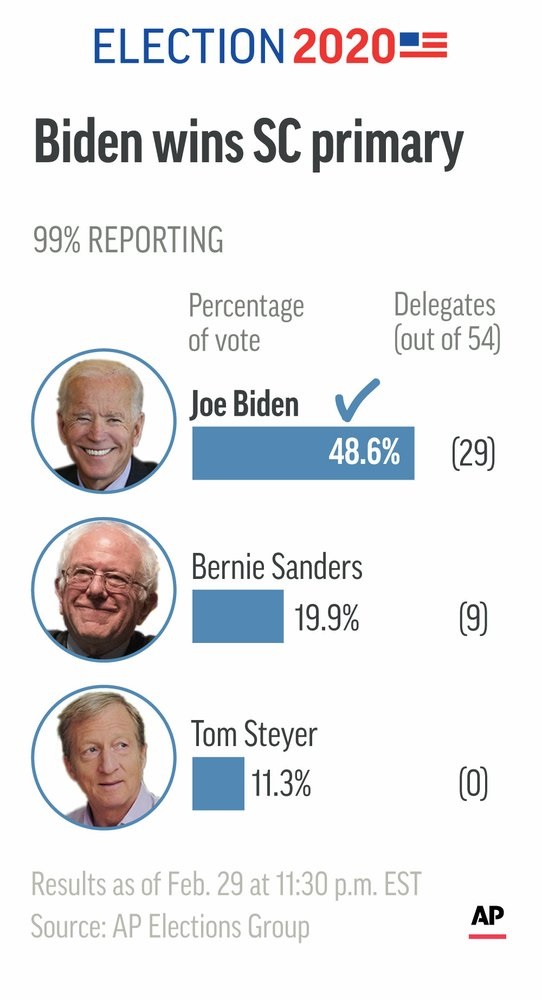 Joe Biden scored an impressive victory yesterday in South Carolina’s Democratic primary mainly on the strength of African American support.  It was a decisive win with Biden receiving close to 50 percent of the vote and one that could force moderate rivals out of the race.  As reported by the Associated Press.

“Biden’s win came at a perilous moment in his 2020 bid as he needed an emphatic rebound after underwhelming performances this month in Iowa, New Hampshire and Nevada. The race now pivots to the 14 states from Maine to California that vote on Tuesday in what effect will be a national primary.

“We are very much alive,” Biden declared at an exuberant post-election rally. “For all of you who have been knocked down, counted out, left behind — this is your campaign.”

Sanders claimed a distant second place, a loss that gave a momentary respite to anxious Democrats who feared that the democratic socialist would finish February with four consecutive top finishes that would make it difficult for anyone to overtake him.

The Associated Press declared Biden the winner just after the polls closed in South Carolina. The AP based the call on data from AP VoteCast, a survey of the electorate conducted for the AP by NORC at the University of Chicago. The survey showed a convincing win for Biden.”

NOTE:  After this posting was made, candidate Tom Steyer announced he was ending his candidacy and was dropping out of the Democratic Party presidential nomination race. It may be time for others to do the same.