State spending on higher education grew 5 percent for this fiscal year according to the results of the  annual  “Grapevine survey that was released this morning.  The survey provides a first look at state higher-education funding in the new fiscal year and is compiled by the Center for the Study of Education Policy at Illinois State University and the State Higher Education Executive Officers.

Two years ago, 18 states reported a drop in funding from the year earlier. This year, just three states cut appropriations to higher education: Alaska, Hawaii, and New York. States on the opposite end of the spectrum increased funding by as much as 11.4 percent.

Despite varying levels of support nationwide, nearly half of the states reported increases in spending of 5 percent or more. Spending in five states — California, Illinois, New Jersey, Tennessee, and Texas — accounted for about half of the total increase in state higher-education financing nationwide this fiscal year, the survey said.

The survey showed positive momentum in higher-ed financing over the longer term. State spending on colleges has increased by 18.8 percent since 2015.

Only five states saw declines from 2015 to 2020, with Alaska posting the biggest drop — nearly 22 percent. The state’s Republican governor, Michael J. Dunleavy, had threatened to cut funding to the University of Alaska system by $135 million last year. Eventually the university’s regents worked out a deal with him to limit the cut to $70 million over three years, or the drop would have been far worse.

With a few exceptions, good news for our colleges and universities! 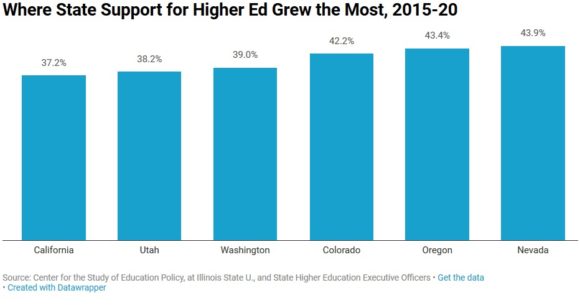