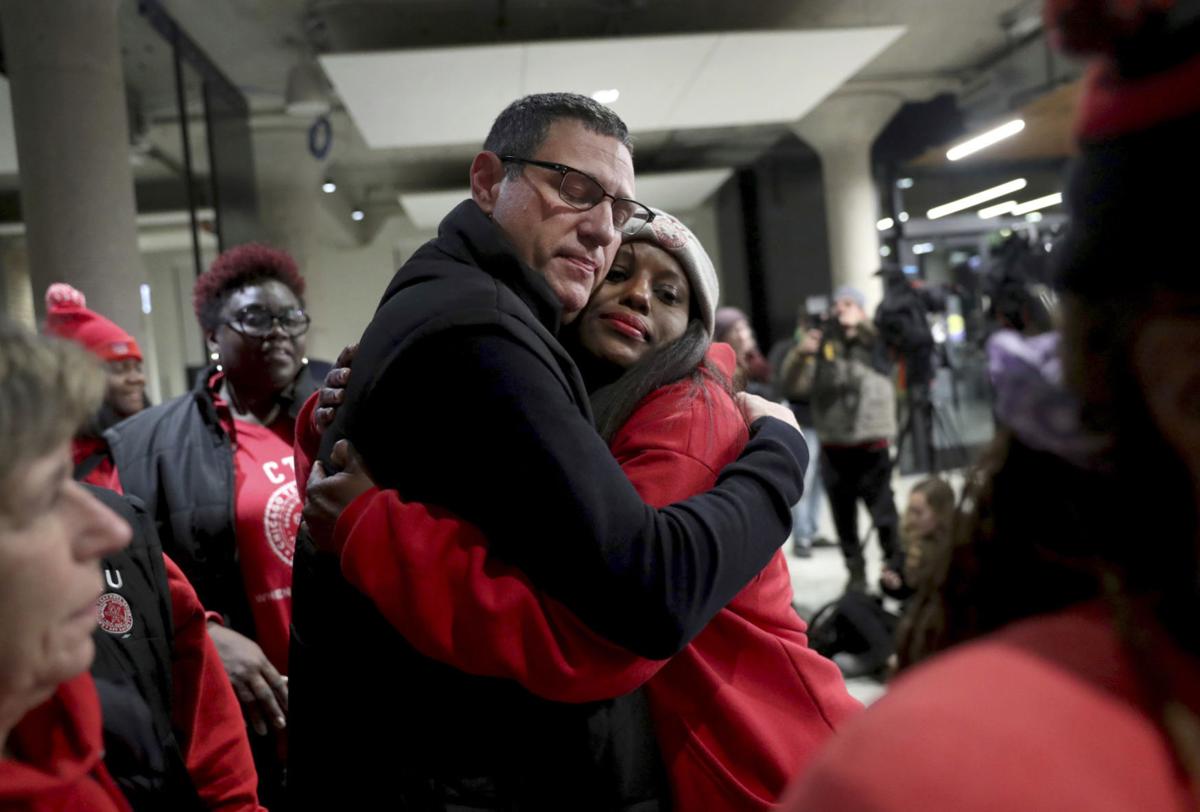 Chicago Teachers Celebrating the End of Their Strike

Yesterday, Chicago’s leaders announced an end to the teachers’ strike that lasted 11 days, the longest there in decades, and turned life upside down for families across the nation’s third-largest school district.  More than 300,000 public school students prepared to return to school with this announcement.  As reported by The New York Times:

“… the clash between the teachers and Chicago’s new mayor, Lori Lightfoot, appeared to have brought mixed results. The city agreed to spend millions of dollars on reducing class sizes; promised to pay for hundreds more social workers, nurses and librarians; and approved a 16 percent salary increase over the coming five years. But not all union members were satisfied; a vote to approve a tentative deal was noticeably split, and some teachers wanted to press on to seek steeper reductions in class sizes, more teacher preparation time and aid for special education.

Still, the strike in Chicago, which followed a series of major teacher walkouts in conservative states like West Virginia and Oklahoma as well as liberal cities like Los Angeles and Denver, reflected a renewed wave of activism from teachers.

“What it says is that West Virginia and Oklahoma wasn’t sui generis; it wasn’t an isolated moment,” said Randi Weingarten, the president of the American Federation of Teachers, who made several trips to Chicago during the strike. “This is now a strategy.”

Teachers in Chicago drew attention to matters far beyond salary to broad issues of social justice, casting their fight as a battle for equity among the city’s poor and rich families, for safety for immigrants and for affordable housing in an ever more expensive city. And some Democratic presidential hopefuls and others were quick to line up behind the teachers, a pivot from the political mood a decade ago when even some on the left criticized the power of teachers’ unions.

“I think the entire wave of teachers’ strikes that we’ve been seeing should have school boards quaking in their boots,” said Ileen DeVault, a professor of labor history at Cornell University. “I think more and more teachers are going to be saying, ‘Gee, I have some of the same problems. Look what the Chicago teachers, look what the L.A. teachers, look what all these other groups of teachers got when they went on strike.’”

The strike was a blow to Ms. Lightfoot, a political novice five months into her first term as mayor. Elected by winning all 50 of the city’s wards, the mayor has portrayed herself as a reformer who wants many of the very goals that the teachers were demanding, including full-time nurses, social workers and librarians in all city schools; expanded counseling services; and recruitment of more black and Hispanic teachers.

Yet throughout the walkout, Ms. Lightfoot found herself pitted against the teachers, many of whom said she was failing to keep her promises. At the same time, opponents of the teachers’ strike said Ms. Lightfoot was giving too many concessions at a time when the school system’s finances, like that of the city, are shaky. And all the while, residents spoke of the tumult that the strike created for parents with few child-care options, for student athletes who could not play in games and for high school students with standardized tests that had to be delayed.

In an interview on Thursday, Ms. Lightfoot, who had been a target of protest signs along picket lines, said that the agreement was “without a doubt” good for the city — for the city’s students and teachers and for taxpayers.

“When you pick apart the pieces of this deal, whether it’s individual pieces or comprehensively, what you’re going to find is a lot of things that are focused on advancing the educational gains and outcomes for our students,” she said.

Jesse Sharkey, the Chicago Teachers Union president, held a news conference that made no secret of lingering bitterness on both sides.

“We feel like we achieved a lot of things,” he said. “There’s some things we didn’t achieve. But it’s not a day for photo ops.”

Chicago’s finances are deeply troubled, struggling with huge unfunded pension liabilities and budget shortfalls that have led to tax increases in recent years. In recent days, the editorial boards of the city’s two major newspapers, The Tribune and The Sun-Times, cited those difficulties repeatedly and wrote critically about the teachers’ union.

“They made outlandish demands as if City Hall owed teachers not just a big wage bump but a utopian version of Chicago,” The Tribune’s editorial board said.

With an annual budget of $5.98 billion, the city’s school system has also long faced fiscal struggles. In recent years, major credit agencies have rated the school system’s bonds below investment grade, though over recent months, its financial outlook has stabilized somewhat, in part because of increased state aid.

Laurence Msall, the president of the Civic Federation, a Chicago-based budget watchdog, said the school district had little room to spend more at a time of tight budgets and sustained enrollment losses. “The long-term sustainability of Chicago Public Schools remains a question,” Mr. Msall said, “and the viability of this contract and what has been offered remains to be seen.”

Officials were still piecing together the exact price of the deal, which some have estimated to cost about $500 million, but Ms. Lightfoot said that fiscal limits had been carefully weighed throughout weeks of negotiation. “We were very, very conscious of making sure that we only agreed to things — on an individualized basis but also in the aggregate — that were sustainable and financially responsible, and that’s part of the reason we weren’t able to reach an agreement any sooner,” Ms. Lightfoot said.

Chicago was a birthplace of unionization among teachers in the late 1800s, and the heavily Democratic city has remained a center of teacher activism. For days, clusters of teachers — many of them wearing red — gathered outside schools, marched through downtown and met in parks for rallies.

The strike, which was the first multiday work stoppage by Chicago Public Schools teachers since 2012, lasted longer than any teachers’ strike in Chicago since 1987. The Chicago Teachers Union clashed with Rahm Emanuel, Ms. Lightfoot’s predecessor as mayor, during the 2012 strike, which lasted seven school days. In December 2018, Chicago was the site of the first teacher strike at a charter school network.”

Congratulations to Chicago’s Teachers and the City for reaching an agreement!