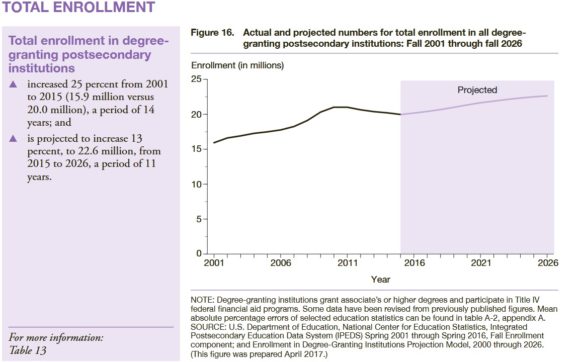 The Chronicle of Higher Education has an article this morning that presents the views of five college administrators about the state of student enrollments.  Each administrator gives her/his perspective but all agree that there is concern for the future especially for small, private colleges with modest endowments.  Here is summary from one of the pieces written  by Jon Boeckenstedt, vice provost for enrollment management at Oregon State University.

“Fundamentally, colleges are the same: We measure quality by easily quantifiable inputs, not by more nebulous outputs; we take stock of the opinions of consumer magazines and newspapers more than of knowledgeable educators; we refuse to let competitors surpass us. If students once saw real differences between Carleton, Grinnell, and Oberlin, those distinctions faded as the sector became commoditized. It is no wonder that applications are skyrocketing, yield rates are falling, predictive models are failing us, discounts are rising, and — yes — colleges of some renown are starting to close.

In retrospect, 2007 seems to have been the tipping point, the final warning that we were on a collision course with reality. Tuition increases have slowed a bit since then but are still increasing faster than inflation and are exacerbated by flat or decreasing family incomes.

We are facing a crisis in enrollment, but it’s not just an enrollment challenge. Instead, it requires the attention of every member of every university community coming together to think less about our own self-interest and more about the common good of our institutions and society. Big public universities and well-endowed private colleges with powerful brands are safe for the near future — or so it seemed until a few recent announcements that make even the most optimistic of us wonder.

The big question: Can we begin to get back in shape, or will our collective complacency finally do us in?”

The USDOE IPEDS data provided above indicate that postsecondary enrollments are flat and may even show a small increase in the years through 2026.  While the total enrollment projection is probably accurate, it will be very uneven for different regions of the country and for the different higher education sectors.