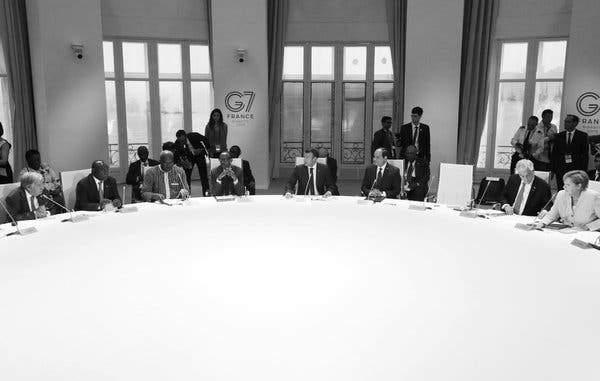 President Trump’s chair (on right) remained empty during a climate-focused session of the Group of 7 summit.

The New York Times editorial staff reviews the G-7 meeting held in Biarritz, France this past weekend and comments on the fact that the leaders of the major economies agreed to avoid setting off President Trump so he would not throw a hissy fit.  Below is the entire editorial.

Group of 7, Minus Trump

One of the few concrete pledges to come out of the Group of 7 summit in Biarritz, on France’s Atlantic coast, was an aid package of $20 million for Brazil and its neighbors in the Amazon basin to fight fires raging through the rainforest. The sum was a trifle, given the scale of the fires and the size of the economies of the donors (the charity of the actor Leonardo DiCaprio separately pledged $5 million), but it was meant to highlight a more ambitious program of protection and reforestation in the works.

More noteworthy than the token action was the fact that President Trump skipped the session at which it was taken, which happened to be devoted to climate, oceans and biodiversity. Even more noteworthy was that neither French President Emmanuel Macron, the convener of this year’s summit and champion of action on the Amazon fires, nor hardly anyone else seemed to find this particularly disturbing.

In fact, they seemed relieved. Other American officials were there, said Mr. Macron, and it had never been his goal to challenge Mr. Trump’s climate denialism. In fact, he said he and the American president had a “long, rich and totally positive” discussion on the Amazon fires. Maybe they did, but by now Mr. Macron should know better than most that the Trump who likes being agreeable face to face can quickly turn mean at a distance.

That, in fact, was the real theme of the Biarritz summit in the third year of the Trump presidency, as described by Peter Baker of The Times: “Rule 1 at the G7 Meeting? Don’t Get You-Know-Who Mad.” Mr. Macron cautiously avoided trying to draft a joint communiqué, perhaps recalling how Mr. Trump pulled his signature off the one reached last year in Canada in a tantrum over something Canadian Prime Minister Justin Trudeau said.

Mr. Macron’s conciliatory efforts were not all in vain. One unexpected development was his announcement that Mr. Trump may soon have a direct meeting with Iran’s president, Hassan Rouhani. Mr. Macron and other European leaders have worked hard to ease tensions between Iran and the United States and to salvage what they can of the agreement they and President Barack Obama reached with Iran in 2015 limiting Iran’s nuclear potential.

Still, there were plenty of hazards at this summit. One was Mr. Trump’s keenness to get his pal Vladimir Putin back into the Group of 7, from which he was expelled over Russia’s seizure of Crimea in 2014. Mr. Trump blames Mr. Obama for expelling Mr. Putin, and said he “certainly” would explore inviting him to next year’s summit meeting, which the United States is hosting, perhaps at Mr. Trump’s Doral golf resort near Miami.

Mr. Trump also created some unease with seesaw statements on the tariff war with China, but the assembled heads of government bent over backward not to provoke his ire.

Boris Johnson, the disheveled newly installed prime minister of Britain normally never balks at speaking his mind, provided the best example of Trump-fear. On the eve of the summit, Mr. Johnson strongly criticized those who support tariffs — read Mr. Trump. But in Biarritz, in front of cameras alongside the president, Mr. Johnson offered only gentle criticism of Mr. Trump’s belligerent trade policies, “just to register a faint, sheeplike note of our view on the trade war.”

And so it went. No tantrum, like the one Mr. Trump recently threw over Denmark’s refusal to sell him Greenland.

On the contrary, his tweets suggested he felt himself among kindred spirits. “The question I was asked most today by fellow World Leaders, who think the USA is doing so well and is stronger than ever before, happens to be, ‘Mr. President, why does the American media hate your Country so much? Why are they rooting for it to fail?’”

Unless one of the World Leaders confesses to saying this, it is probably another lie. The pity of the entire Group of 7 show was that it was part of a new normal in which the world’s major liberal democracies basically accept that they are out of sync with the president of the nation that should be leading their efforts to manage the world and its resources wisely and responsibly, but isn’t.

There may be no consensus on just how much damage is being done by the fires raging through the Amazon basin. But when countless fires are ravaging one of the world’s greatest rain forests, the threat is global. The president of the United States should be standing with Mr. Macron and German Chancellor Angela Merkel in demanding that the world address it.

Yet Mr. Trump’s decision to skip the meeting on the environment was treated as normal. It was left to the United Nations secretary general, António Guterres, to express the forlorn hope that the American people would demonstrate the commitment to fighting climate change that was absent from their president.

There is no point in trying to change Mr. Trump’s mind about joining in the fight on climate change — “You can’t rewrite the past,” as Mr. Macron put it. Just don’t get him mad.”