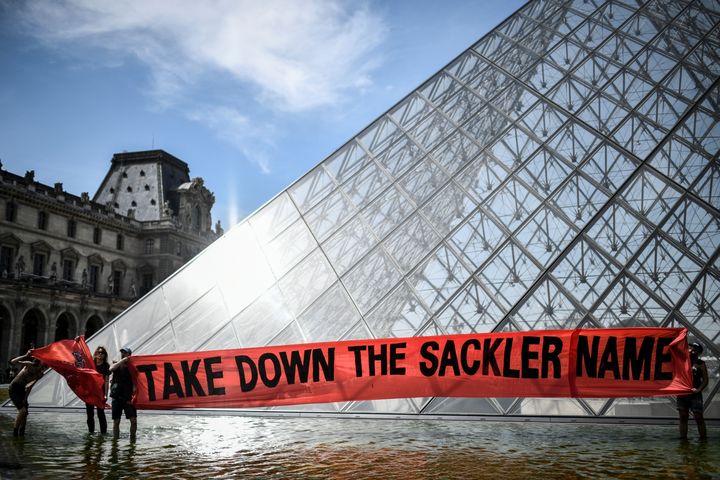 France’s  Louvre Museum has scrubbed the Sackler family’s name from its walls, removing any  trace of its ties to the billionaire family that owns Purdue Pharma, the producer of the opioid OxyContin.   The decision came after protesters demanded that the name be taken down in light of the ongoing opioid crisis.  As reported in the news media.

The art philanthropist family’s name was removed from a major wing devoted to eastern antiquities over the past couple of weeks, the New York Times reported yesterday. This Paris museum’s wing had been known as the Sackler Wing of Oriental Antiquities since 1997.

A plaque honoring the family’s donations to the museum was also removed from the gallery’s entrance. Other mentions of the “Sackler Wing” throughout the museum were covered with tape, the Times reported.

There is also no mention of the Sackler Wing on the museum’s website.

A representative of the museum, confirmed the names’ removal in a statement to The Guardian.

“The Theresa and Mortimer Sackler foundation supported the refurbishment of rooms of Persian and Levantine art in the period 1996 to 1997. Since then, there has been no other donation from the Sackler family,” the statement read. “On 10 October 2003, the museum board decided to limit the duration period of named rooms to 20 years. This donation is more than 20 years old, the name-period is therefore legally closed and these rooms no longer carry the Sackler name.”

The scrubbing follows major museums in Europe and New York City announcing in recent months that they will no longer accept donations from the family. This includes New York’s Guggenheim Museum and the Metropolitan Museum of Art. Many of the museums have said that they will not be removing the Sackler name or changing it, however, according to the Times.

The Louvre’s action also follows a July 1 protest at the Paris museum demanding that it remove the Sackler name. Protesters unfurled a large red-and-black banner reading, “Take down the Sackler name” before the iconic glass Louvre Pyramid. They also carried signs with statements such as “Shame on Sackler” in French.

News of the Louvre’s separation from the Sacklers came the same week that federal data revealed that drugmakers and distributors increased shipments of opioid painkillers to pharmacies across the U.S. from 2006 to 2012 as the nation’s addiction crisis intensified.

Over that seven-year period, there were more than 100,000 overdose deaths from the prescription drugs, according to the U.S. Centers for Disease Control and Prevention.

According to a Forbes report, the highly addictive Purdue Pharma painkillers have generated a $13 billion net worth for the Sackler family.

Purdue Pharma in 2007 was hit with a $635 million federal fine for falsely claiming its most widely known drug, OxyContin, was not as addictive as earlier opioids.