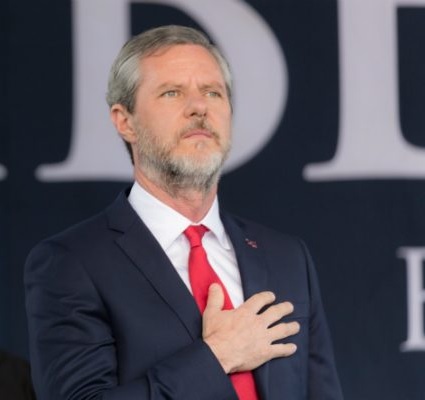 Jerry Falwell Jr., the head of the evangelical Liberty University and a staunch defender of President Donald Trump, is coming under fire for an attack on Russel Moore, a Christian leader who said the administration’s squalid detention conditions for migrant children “should shock all of our consciences.”

Russell Moore, president of the Ethics and Religious Liberty Commission of the Southern Baptist Convention, tweeted:

“The reports of the conditions for migrant children at the border should shock all of our consciences. Those created in the image of God should be treated with dignity and compassion, especially those seeking refuge from violence back home. We can do better than this.

The call for “dignity and compassion” didn’t sit well with Falwell.

He fired back at Russell by demanding to know if he ever “made a payroll” or “built an organization of any type from scratch.”   Here is Falwell’s full reply:

“Who are you @drmoore ? Have you ever made a payroll? Have you ever built an organization of any type from scratch? What gives you authority to speak on any issue? I’m being serious. You’re nothing but an employee- a bureaucrat.”

Falwell inherited his role as Liberty University’s president from his televangelist father. But he suggested that building an organization from scratch and making a payroll are conditions that must be met before sharing an opinion.

“What gives you authority to speak on any issue?” he demanded. “I’m being serious.”

Falwell is nothing more than a demagogue who is an embarrassment to his university and to honest evangelical Christians.  He will reap his just reward on Judgment Day!