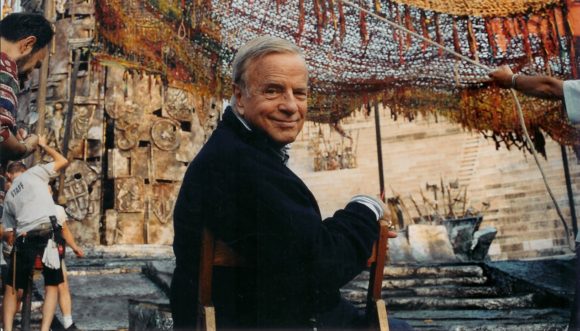 Italian director Franco Zeffirelli, who delighted audiences around the world with his romantic vision and extravagant productions died yesterday at the age of 96.

While Zeffirelli was most popularly known for his films such as Romeo and Juliet (1968),  his name was also inextricably linked to the theater and opera. He produced classics for the world’s most famous opera houses, from Milan’s venerable La Scala to the Metropolitan Opera in New York and plays for London and Italian stages.  He staged eleven productions here in New York at the Metropolitan Opera including two, La Boheme and Turandot, that are still part of the Met’s repertoire.  When the curtain goes up on a Zeffirelli set, the audience oohs and aahs and applauds the color and attention to historical and cultural details for which he is famous.

In his 2006 autobiography, Zeffirelli recounted how his mother attended her husband’s funeral pregnant with another man’s child. Unable to give the baby either her name or his father’s, she tried to name him Zeffiretti, after an aria in Mozart’s Idomeneo. But a typographical error made it Zeffirelli, making him “the only person in the world with Zeffirelli as a name, thanks to my mother’s folly.”

His mother died of tuberculosis when he was 6, and Zeffirelli went to live with his father’s cousin, whom he affectionately called Zia (Aunt) Lide.

Living in Zia Lide’s house and getting weekly visits from his father, Zeffirelli developed the passions that would shape his life. The first was for opera, after seeing Wagner’s  Walkure  at age 8 or 9 in Florence. The second was a love of English culture and literature, after his father started him on thrice-weekly English lessons.

His experiences with the British expatriate community under fascism, and their staunch disbelief that they would be victimized by Benito Mussolini’s regime, were at the heart of the semi-autobiographical 1991 film Tea with Mussolini starring Judith Dench, Maggie Smith, and Cher.

I had the pleasure of hearing him give a lecture on opera at Lincoln Center in New York in 1998.  During the question and lecture portion, he was asked:  How does he start a new production?  Does he start he start with the music, the story, the performers, or the sets?  He immediately responded that he starts with the audience who he visualizes as an ensemble of individuals each with unique expectations and needs for coming to a production.  As a result, his work becomes a struggle to meet these individual expectations.

He was a master of his art and a person for the people!