A breakthrough in man-machine interfacing was announced that deciphers the brain’s motor commands guiding vocal movement during speech — the tap of the tongue, the narrowing of the lips — and generates intelligible sentences that approximate a speaker’s natural cadence (see sample video above).

Scientists are reporting that they have developed a virtual prosthetic voice, a system that decodes the brain’s vocal intentions and translates them into mostly understandable speech, with no need to move a muscle, even those in the mouth. (The physicist and author Stephen Hawking used a muscle in his cheek to type keyboard characters, which a computer synthesized into speech.)  As reported:

…the new work represented a “proof of principle,” a preview of what may be possible after further experimentation and refinement. The system was tested on people who speak normally; it has not been tested in people whose neurological conditions or injuries, such as common strokes, could make the decoding difficult or impossible.

For the new trial, scientists at the University of California, San Francisco, and U.C. Berkeley recruited five people who were in the hospital being evaluated for epilepsy surgery. 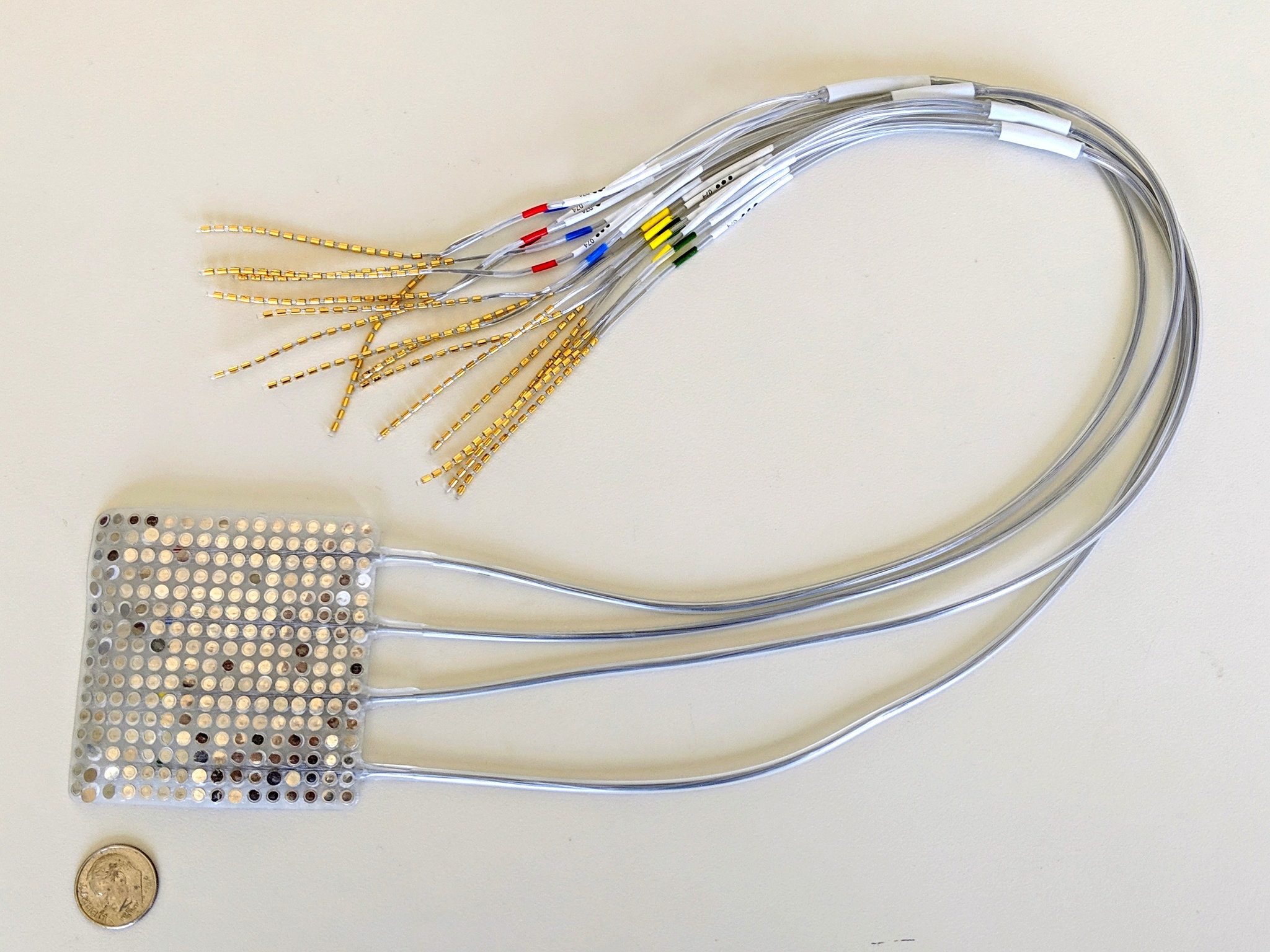 The ECoG Electrode Array is made up of intracranial electrodes that record brain activity.

Many people with epilepsy do poorly on medication and opt to undergo brain surgery. Before operating, doctors must first locate the “hot spot” in each person’s brain where the seizures originate; this is done with electrodes that are placed in the brain, or on its surface, and listen for telltale electrical storms.

Pinpointing this location can take weeks. In the interim, patients go through their days with electrodes implanted in or near brain regions that are involved in movement and auditory signaling. These patients often consent to additional experiments that piggyback on those implants.

Five such patients at U.C.S.F. agreed to test the virtual voice generator. Each had been implanted with one or two electrode arrays (see photograph above): stamp-size pads, containing hundreds of tiny electrodes, that were placed on the surface of the brain.

As each participant recited hundreds of sentences, the electrodes recorded the firing patterns of neurons in the motor cortex. The researchers associated those patterns with the subtle movements of the patient’s lips, tongue, larynx and jaw that occur during natural speech. The team then translated those movements into spoken sentences.

Native English speakers were asked to listen to the sentences to test the fluency of the virtual voices. As much as 70 percent of what was spoken by the virtual system was intelligible, the study found.

“We showed, by decoding the brain activity guiding articulation, we could simulate speech that is more accurate and natural sounding than synthesized speech based on extracting sound representations from the brain,” said Dr. Edward Chang, a professor of neurosurgery at U.C.S.F. and an author of the new study. His colleagues were Gopala K. Anumanchipalli, also of U.C.S.F., and Josh Chartier, who is affiliated with both U.C.S.F. and Berkeley.

Previous implant-based communication systems have produced about eight words a minute. The new program generates about 150 a minute, the pace of natural speech.

The researchers also found that a synthesized voice system based on one person’s brain activity could be used, and adapted, by someone else — an indication that off-the-shelf virtual systems could be available one day.

The team is planning to move to clinical trials to further test the system. The biggest clinical challenge may be finding suitable patients: strokes that disable a person’s speech often also damage or wipe out the areas of the brain that support speech articulation.

Still, the field of brain-machine interface technology, as it is known, is advancing rapidly, with teams around the world adding refinements that might be tailored to specific injuries.

“With continued progress,” wrote Chethan Pandarinath and Yahia H. Ali, biomedical engineers at Emory University and Georgia Institute of Technology, in an accompanying commentary, “we can hope that individuals with speech impairments will regain the ability to freely speak their minds and reconnect with the world around them.”

Congratulations to all those involved with the development of this prosthetic.  We will see a good deal more of this type of man-machine and bio-sensing  technology in the next decade for many other bodily functions.