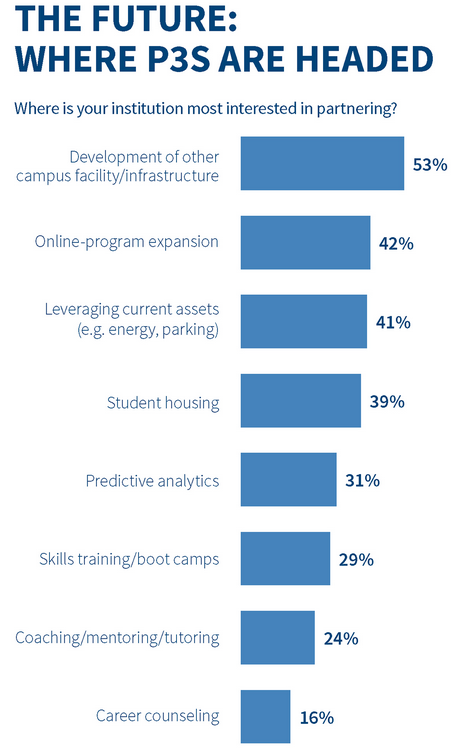 Goldie Blumestyk has an article in the online edition of The Chronicle of Higher Education highlighting a growing movement among college administrators to outsource services.  Here is an excerpt:

“If you hear the term [outsourcing]  and think “dining services” or “bookstore,” you’re not wrong. But you’d be overlooking a range of other services that colleges increasingly eye as ripe for partnership with outside parties. Among them: managing online programs, predictive-analytics systems, skills training and boot camps, and even career counseling.

Those findings come from a new poll by The Chronicle and P3-Edu, a coming conference hosted by George Mason University. (P3 stands for “public-private partnership”; the term is commonly used even when university partners are private too.) The survey collected responses from 249 presidents, provosts, and chief financial officers.

I’ve written before about the issues that arise when colleges align with companies for services that touch the classroom and other areas close to the academic core.

The chart above shows some top-line results from the survey. (Respondents could list more than one answer.) It’s not a scientific sampling, but it does offer a snapshot of the state of play.

What I found even more interesting were the anonymous comments people provided about their recent experiences with P3s, which laid out the promise of the partnerships and the reservations about them.

Let’s start with those reservations. (C’mon, you knew I’d do that.) More than 80 answered that question. Losing control of operations and finding companies’ missions misaligned with the institution’s were the fears that came up the most. College leaders mentioned the potential for communication failures and damage to their reputations and brands.

“Always a concern that control is diluted. As a public institution, accountability is never diluted.”

“Companies are profit-making. We’re a school. We do want efficiencies, but our missions are different.”

“Basically selling our soul to the devil.”

Several respondents cited concerns about costs, forgoing too much in income, and whether partnerships would be sustainable over the life of their contracts. As one wrote: “Turnover in the C-suite can undermine a partnership.” As another put it: “Early in the process, everyone is ‘in love’ and life is good. Later in the process, sorry to say, ‘divorces’ occur.”

Those are valid concerns, and they barely touch on some of the more intricate possibilities — say, if a vendor’s plan for building online enrollment doesn’t mesh with an academic department’s belief in how a particular degree program should be structured.

Still, there’s no denying that colleges see value in these outside parties. Two-thirds of college leaders said the “unique competencies” of private parties were a top reason they would look to them — or had looked to them already — as partners.

The rising interest in P3s is also why George Mason decided to hold its P3 conference again this spring.

About half of the institutions that responded to the survey enroll fewer than 2,000 students; the rest are larger. Nearly three-quarters reported endowments no greater than $250 million; 14 percent were over $1 billion.