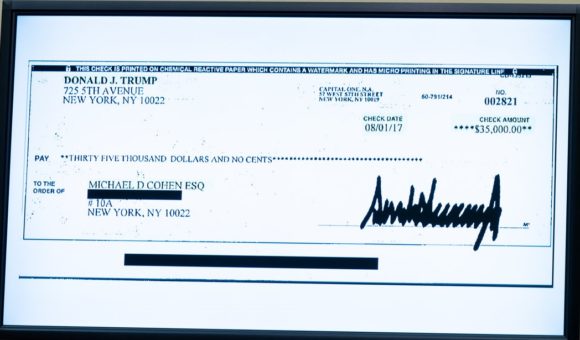 A check from President Trump to Michael Cohen on display at the House committee hearing.

Michael Cohen’s testimony yesterday revealed a lot about the life of Donald Trump’s fixer and what he did to protect the president over a number of years.  You can check out a New York Times article for highlights from the all-day affair.

Peter Wehner, a senior fellow at the Ethics and Public Policy Center and a former Republican, has an op-ed today blasting the way the GOP sank “further into Trump’s cesspool” during the hearing.  His main message was that what they left out of their questioning of Michael Cohen says more about “the degradation of my former party than anything they said.”  Below is the entire op-ed.

It was a sad day for Michael Cohen but a sadder day for Republicans to see their party leaders attack and attack while asking few substantive questions.

Michael Cohen’s testimony before Congress on Wednesday revealed as much about the Republican Party as it did about President Trump and his former lawyer. In the aftermath of Mr. Cohen’s damning testimony, several things stand out.

The first is that unlike John Dean, the former White House counsel who delivered searing testimony against President Richard Nixon in 1973, Mr. Cohen produced documents of Mr. Trump’s ethical and criminal wrongdoing. (Mr. Dean had to wait for the Watergate tapes to prove that what he was saying was true.)

Mr. Cohen’s most explosive evidence included a copy of a check Mr. Trump wrote from his personal bank account, while he was president, to reimburse Mr. Cohen for hush money payments. The purpose of that hush money, of course, was to cover up Mr. Trump’s affair with a pornographic film star in order to prevent damage to his campaign.

Other evidence produced by Mr. Cohen included financial statements, examples of Mr. Trump inflating and deflating his wealth to serve his interests, examples of charity fraud, efforts to intimidate Mr. Cohen and his family and even letters sent by Mr. Cohen to academic institutions threatening legal actions if Mr. Trump’s grades and SAT scores were released. (Mr. Trump hammered President Barack Obama on this front, referring to him as a “terrible student, terrible,” and mocking him for not releasing his grades.)

Yet Republicans on the House Committee on Oversight and Reform, in their frantic effort to discredit Mr. Cohen, went after him while steadfastly ignoring the actual evidence he produced. They tried to impugn his character, but were unable to impugn the documents he provided. Nor did a single Republican offer a character defense of Mr. Trump. It turns out that was too much, even for them.

In that sense, what Republicans didn’t say reveals the truth about what happened at the hearing on Wednesday as much as what they did say. Republicans showed no interest, for example, in pursuing fresh allegations made by Mr. Cohen that Mr. Trump knew that WikiLeaks planned to release hacked emails from the Democratic National Committee in the summer of 2016.

In a sane world, the fact that the president’s former lawyer produced evidence that the president knowingly and deceptively committed a federal crime — hush money payments that violated campaign finance laws — is something that even members of the president’s own party would find disquieting. But not today’s Republican Party.

Instead, in the most transparent and ham-handed way, they saw no evil and heard no evil, unless it involved Mr. Cohen. Republicans on the committee tried to destroy the credibility of his testimony, not because they believe that his testimony is false, but because they fear it is true.

By now Republicans must know, deep in their hearts, that Mr. Cohen’s portrayal of Mr. Trump as a “racist,” “a con man” and “a cheat” is spot on. So it is the truth they fear, and it is the truth — the fundamental reality of the world as it actually is — that they feel compelled to destroy. This is the central organizing principle of the Republican Party now. More than tax cuts. More than trade wars. More even than building a wall on our southern border. Republicans are dedicated to annihilating truth in order to defend Mr. Trump and they will go after anyone, from Mr. Cohen to Robert Mueller, who is a threat to him.

A second thing that stands out from Mr. Cohen’s testimony is that the Republican Party has been as corrupted by its association with Mr. Trump as Mr. Cohen was by his. As Mr. Cohen told Republican lawmakers, “I did the same thing that you’re doing now. For 10 years. I protected Mr. Trump for 10 years.”

He then issued this warning to them: “The more people that follow Mr. Trump — as I did blindly — are going to suffer the same consequences that I’m suffering.” Mr. Cohen later explained the ethos of Trumpworld: “Everybody’s job at the Trump Organization is to protect Mr. Trump. Every day most of us knew we were coming and we were going to lie for him about something. That became the norm.”

The ethic that became the norm at the Trump Organization —- defacing the truth and disfiguring reality in the service of Donald J. Trump — is the ethic that has become the norm of the Republican Party and the American right.

This is what some of us who are conservatives and who have been lifelong Republicans have warned since Mr. Trump began his quest for the presidency — that his corruptions would eventually become theirs.

The way these things happen is simple and insidious. In this case, because Mr. Trump was their party’s nominee, many Republicans felt duty bound to defend him, even though they would from time to time call him out for his worst offenses. They also held out the hope that Mr. Trump would grow in office and become more presidential.

What happened is quite different: As Mr. Trump was elected and then inaugurated, Republicans became more and more reluctant to call him out and more and more vocal in defending him and attacking his critics; rather than weakening, their loyalty to him intensified. And the president, rather than becoming more responsible, has become less restrained, more volatile, more unhinged. The result is the ethical wreckage we saw on display Wednesday.

Republicans should brace for even more damaging revelations. The evidence presented on Wednesday was of course harmful to the president, but Mr. Cohen quite likely revealed only a small fraction of what the Southern District of New York and the Mueller investigation have amassed. But Mr. Cohen did suggest that federal prosecutors are investigating unspecified criminal allegations involving the president that have not been made public.

When this story is finally told — when the sordid details are revealed, the dots finally connected — the Republican Party will be the political and institutional version of Mr. Cohen, who squandered his integrity in the service of a man of borderless corruption.