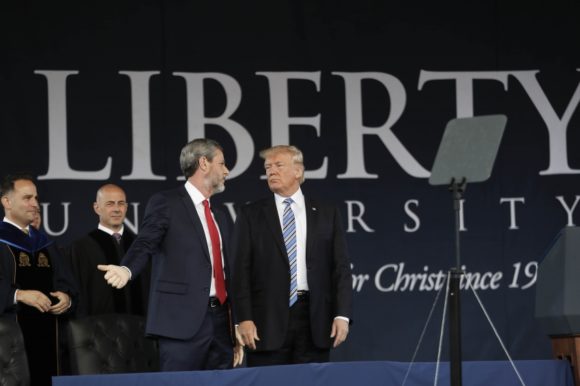 The Wall Street Journal reported yesterday that Donald Trump’s presidential campaign and at least one administrator from Liberty University had a relationship involving “ginning up” poll numbers in exchange for cash. Specifically, Trump’s lawyer, Michael Cohen paid Liberty University’s chief information officer, John Gauger, to manipulate online polls in an effort to raise Trump’s profile before his successful presidential campaign.  The story shows a deeper relationship than previously reported between the president and employees of the university, a private Christian institution located in Virginia and led by Jerry L. Falwell Jr., a prominent Trump ally.  Below is a recap of the story as it appeared in The Chronicle of Higher Education.

Why is it that everything Trump touches becomes some kind of shady deal?

President Trump’s former top lawyer paid Liberty University’s chief information officer to manipulate online polls in an effort to raise Trump’s profile before his successful presidential campaign, The Wall Street Journal reported on Thursday. The news shows a deeper relationship than previously reported between the president and employees of the university, a private Christian institution located in Virginia and led by Jerry L. Falwell Jr., a prominent Trump ally.

Gauger told the Journal he had been paid by Cohen with a blue Walmart bag filled with $12,000 to $13,000 in cash, as well as a boxing glove once used by a Brazilian athlete. Cohen disputed that characterization, telling the Journal that Gauger had been paid by check, not cash.
Those previously unreported connections are the latest in a longstanding series of ties between Trump and Liberty. Trump has delivered multiple speeches at Liberty in recent years, including at a 2017 commencement. An administrator and Liberty students also produced a film about a former firefighter who said he had heard God say that Trump would be the next president.

Falwell has been a prominent supporter of Trump and, early in the president’s administration, said he would advise the White House on higher-education issues. In August, Falwell attended a state dinner at the White House as a faith leader, sitting with his wife at the head table with the president and first lady, the university said. He previously told The Chronicle that he had met with Trump in the Oval Office and that he had been considered as a possible secretary of education.

Gauger, one of 23 people listed as members of Liberty’s senior-leadership team, did not immediately respond to requests for comment on Thursday, but he told the Journal that Cohen had said he would find Gauger work on Trump’s campaign that did not materialize.
Falwell told The Chronicle he had not directed Gauger to work for Trump. He said he knew Gauger had worked for Trump but did not know the nature of the work.

Liberty allows employees in certain departments to do outside work as long as it does not interfere with their university duties, Falwell said. That policy helps with employee retention.

Generally, he said, the university does not know the nature of the outside work.

In a statement Liberty said Gauger is one of “many” employees “who have made great contributions in their official roles and also enjoyed success as independent entrepreneurs, allowing them to enhance their capabilities and generate more revenue for their families while allowing the university to retain them on our team.”

Cohen, in a tweet, said Trump knew of his attempt to rig the polls. He did not respond to Gauger’s claim to the Journal that he had underpaid the administrator by more than $37,000. “I truly regret my blind loyalty to a man who doesn’t deserve it,” he wrote, referring to Trump.
Cohen pleaded guilty last August to violating campaign-finance law. The Journal reported that none of those charges related to his work with Gauger.

Gauger’s work to promote Trump through online polls took place in January 2014 and February 2015, according to the Journal. One was a CNBC poll about “the country’s top business leaders,” and Gauger reportedly wrote a computer script to gin up votes for Trump. But Trump did not break into the top 100 candidates, according to the newspaper.

Shortly before Trump entered the 2016 presidential campaign, Cohen reportedly asked Gauger to write a similar program for use in a Drudge Report poll of possible Republican candidates. Trump netted 24,000 votes, coming in fifth place, according to the Journal.

Gauger and Cohen began communicating shortly after Trump spoke on Liberty’s campus, in 2012 at Falwell’s invitation, the Journal reported. Cohen attended the event as well, according to the newspaper.

That speech was probably delivered at a fall-2012 convocation, a required regular gathering of students. Falwell introduced Trump at the event, calling him “one of the most influential political leaders in the United States” and joking about building a “Trump Tower” to replace campus dorms.

After the event, Trump posted to Twitter. “Jerry Falwell Jr. stated speech was best in university’s history,” he wrote. “My great honor.”