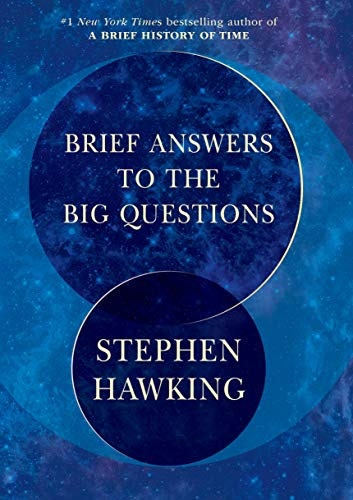 I just finished reading Stephen Hawking’s best seller, Brief Answers to the Big Questions.  I admit that I am a Hawking fan and have read several of his earlier books including A Brief History of Time and The Grand Design. In Brief Answers…Hawking leaves us with his final thoughts on the biggest questions facing humankind.

Will humanity survive? [Hopefully] Should we colonize space? [Yes] Does God exist?  [No].​​

Featuring a foreword by Eddie Redmayne, the actor who won an Oscar playing Stephen Hawking, an introduction by Nobel Laureate Kip Thorne, and an afterword from Hawking’s daughter, Lucy, Brief Answers…is his wonderful last message.

Hawking was perhaps the most renowned scientist since Albert Einstein, and known for his brilliant work in physics and cosmology. However, he never won a Nobel Prize, a fact that he laments on page 117.

Of the ten chapters or big questions, I especially enjoyed “How Do We Shape the Future?”   He states:

“We have two options for the future of humanity as I see it:  first, the exploration of space for alternative planets on which to live, and second, the positive use of artificial intelligence to improve our world.“

The former may be a  century or two  or more away but the latter much  less so.  We are already seeing rudimentary artificial intelligence applications and there are concerns about how beneficial they are or will be.

Below is a book review that appeared in the Financial Express in October 2018.

I recommend this book for anyone but especially those who have enjoyed Hawking’s  earlier work.

Celebrity scientist Stephen Hawking does it again. In his final book—in development while he was alive and completed later—he gives us an addictive manual on our origins, our present and our possible future. We distill his last thoughts from the book.

Hawkins is very clear that with the rate humans are growing in numbers and exploiting the planet, doomsday is very near and imminent. He cites several parameters such as population, political instability, climate change, global warming and nuclear weapons where we have gone wrong and which together, and even alone, could annihilate humans. He warns that global warming will make our planet like Venus—“boiling hot and raining sulphuric acid, but with a temperature of 250 degrees Celsius”. However, like all scientists, he is worried we might already be too late in checking climate change.

Interestingly, he warns against excess of knowledge, born out of the exponential speed of technology and human intelligence, saying that by 2600, “the world’s population would be standing shoulder to shoulder”, the “electricity consumption would make the Earth glow red hot”, and “there would be ten papers a second in my kind of theoretical physics”.

But before that happens, he is almost sure humans would wipe themselves out if not by nuclear disaster, then by brutalism and barbarity, much like in Terminator.

Another possibility he foresees is genetic engineering in humans, which, he says, will become a necessity, given the increasingly complex world and its new challenges, including space travel. Humans will need to improve mental and physical capabilities, which can happen only by inducing DNA mutations. This might extend to machines, with computers being made so complex that they can display true intelligence.

He also reminds us that our luck in ducking a cosmic collision with another heavenly body like an asteroid might run out any day, an event that is “guaranteed by the laws of physics and probability”.

But like Columbus had a New World to discover, we don’t have that luxury today. So he advocates venturing into space, arguing that the human race should not put all its eggs in one basket, or on one planet. He, however, adds somberly that even if humans will surely develop technology to escape apocalypse, millions of other species will be destroyed, “and that will be on our conscience as a race”.

Hawkins reiterates that humans have no option but to colonise other planets or moons, terming it a long-term strategy with a time frame of thousands of years. For the obvious query that why shouldn’t we spend our time and resources on improving the earth instead of colonising other planets, he says we can do that and still spare resources (a quarter of a per cent of the world GDP) for space. And he doesn’t stop at the solar system, insisting that planets in other systems are a better bet. But where is the technology? He sees a glimmer of hope in proposed technologies such as lasers. “We have no other option”, he sums up.

Humans can win over machines

That artificial intelligence will far exceed its current capabilities is never in doubt. Hawkins proposes that given the rate of increase in technology, computers will overtake human intelligence in the next hundred years. At such a point, they will be capable of improving themselves without human help. “When that happens, we will need to ensure that the computers have goals aligned with ours”, he says, adding that success in AI would be the biggest event in human history, but it might also be the last, unless we avoid the risks. Machines will speed up their redesign much faster than biological humans, thus superseding humans. But if used correctly, AI could eradicate disease and poverty, give us smart cities and smart homes, self-driving cars and even create digital doubles of ourselves. Hawkins says our future is a race between growing technology and our wisdom to use it. “Let’s make sure that wisdom wins.”

The most fascinating aspect of space has been the quest and belief in alien life. Hawkins, while conceding that life is very much possible on other planets, is sceptical of intelligent life surviving elsewhere. He argues that evolution need not necessarily lead to intelligence; cosmic disasters like comet collisions could wipe out intelligent life in the bud; intelligent beings could lead to self-destruction, which is what he portends for the human race, saying that since space travel is highly unlikely for fragile humans, in all likelihood, we will send machines to invade other planets, from where they will procreate and spread across the universe. A possibility he warns against is getting in touch with advanced forms of life, for which he thinks mankind is clearly not ready.

At the same time, he classifies computer viruses as forms of life—perfectly capable of reproducing and invading other bodies (computers).

Much as many would like to believe that there is some ‘human-like being’, termed God, who created this universe, and with whom people can conveniently have a relationship with, Hawking dispels the possibility of such an existence. His theory is rather indisputable. If time began with the advent of the Big Bang, there was obviously no time before that. This means that before the Big Bang, there was simply no time for a creator to have existed in. So there could have been no God who created the universe.

No answers to our origins

Hawking invokes Hamlet in demonstrating that the origins of everything were like a nutshell with infinite space as a possibility. He puts forth several theories of physics, past and present, that debate the origins and nature of the universe. He concludes that we still don’t have all the answers, but it is safe to assume that the universe is a dynamic entity that has been changing ever since it began. And, one day, it will probably all end, either in the Big Crunch, where the universe will contract, or with a slow drifting away, where the stars will burn out and all that will remain is emptiness.