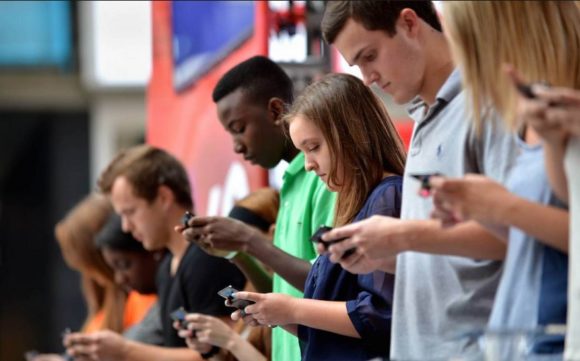 Last month at the Online Learning Consortium’s ACCELERATE Conference I had the pleasure of meeting with the keynote speaker, Jean Twenge, professor of psychology at San Diego State University.  Her talk was excellent so much so it inspired me to read her book iGen: Why Today’s Super-Connected Kids Are Growing Up Less Rebellious, More Tolerant, Less Happy — and Completely Unprepared for Adulthood. The title says it all.  Dr. Twenge’e book is an excellent mixed-methods study of iGen — a term Twenge coined that refers to anyone born between 1995 and 2012. The “i” alludes to the Internet and the generation that “grew up with cellphones, had an Instagram account before they started high school, and do not remember a time before the internet.”  It is quite a good book for anyone – parents, teachers, employers – wanting to understand this generation.  Twenge bases her book on a good deal of longitudinal data that goes back forty years.  She also relies on brief interviews with iGeners that serve to round out her presentation.  Below is a book review that appeared in the Chicago Tribune last year.

I highly recommend Twenge’s book for anyone but especially those of us in education who need to understand what makes our students tick.

The ups and downs of iGen: More tolerant, less happy!

The subtitle of psychologist Jean Twenge’s new book, “iGen,” doesn’t leave much to the imagination: “Why Today’s Super-Connected Kids Are Growing Up Less Rebellious, More Tolerant, Less Happy — and Completely Unprepared for Adulthood.” The iGen — a term Twenge coined — refers to anyone born between 1995 and 2012. The “i” alludes to the internet. This generation “grew up with cellphones, had an Instagram account before they started high school, and do not remember a time before the internet.”

Twenge, a Generation Xer, and the mother of three iGen’ers, attempts to analyze and define an entire generation in under 400 pages. To do so, she relies heavily on existing research, which comes from four massive long-term national surveys. Along with her analysis of this data, she includes dozens of in-depth interviews she did with tweens and teens from a wide variety of backgrounds. The convergence of these diverse personal narratives with the data analysis lends a compelling sense of authority to the work.

Boomer and Generation X readers may recognize some of the traits that the research reveals in their own children: iGen’ers are less likely to drink, to get a driver’s license, to get a job, to have sex, and to go out on dates or with their friends. In short, they are less likely to take risks and to do things that adults do. The positives: The teen birth rate hit an all-time low in 2015, and drinking has diminished in many middle and high schools.

Twenge’s thesis is clear: The iGen is growing up more slowly, “willingly staying children for longer.” The question is why, or if there was some cultural catalyst that prompted these radical behavioral shifts. Twenge contends it is tied to the widespread propagation of the smartphone in 2011-12, which was when most Americans began to own phones and when these dramatic shifts in teen behavior occurred.

So how much time does the iGen actually spend on smartphones? The answer is a lot. In 2013-2015, high school seniors spent at average of 2 ¼ hours texting, two hours on the internet, 1½ hours on electronic gaming and a half-hour on video chats. That’s a total of six hours per day in their leisure time. Eighth-graders averaged five hours per day.

The most troubling findings in the book are related to the impact of total screen time on teenagers’ happiness and life satisfaction. “From the 1980s to the 2000s progressively more teens said they were satisfied,” Twenge writes. “Then, when the first iGen’ers became high school seniors in 2012, satisfaction plummeted, reaching all-time lows in 2015. So as teens spent less time with their friends in person and more time on their phones, their life satisfaction dropped with astonishing speed.”

The paradox is that while electronic communication has helped some teens feel more connected, it has also led to a marked increase in loneliness. This is driven in part by an increased fear of missing out (FOMO) and cyber bullying. Though teens are keeping in “closer touch” with their friends on their phones, the Monitoring the Future survey shows that teens are lonelier today than at any time since the survey began (1991). Thirty-one percent more eighth-graders and 10th-graders felt lonely in 2015 than in 2011, along with 22 percent more 12th-graders. And 48 percent more girls felt left out in 2015 than 2010, compared with a 27 percent increase for boys.

By the book’s end, it is clear that the iGen’s teachers and parents — baby boomers and Gen Xers — have much to learn about the relationship between technology and socio-psychological development in their kids, and in themselves.

Could the technological differences between the generations be more vast? If you grew up in the ’60s or ’70s, you relied on plug-in immobile phones and plunked away on typewriters that had arms and bells. And at college, you called your parents “long distance” on Sunday night, when rates were low. Back then, live in-person visual communication like FaceTime or a Google Hangouts was science fiction.

The point is that communication technology in the last 30 years has not simply changed American culture, but transformed it. Twenge’s book is a wake-up call and poses an essential question: Where do we go from here?