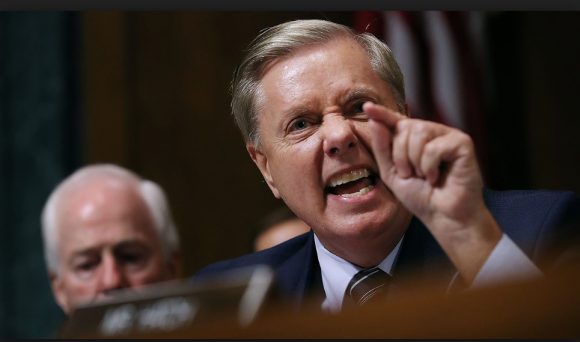 Over the past two weeks, we have seen day after day, hour after hour, coverage of the Brett Kavanaugh confirmation debacle in Washington, D.C..  Yesterday he was confirmed by the U.S. Senate and will take his seat on the US Supreme Court.  In addition to Kavanaugh and Christine Ford, a number of political figures such as Jeff Flake, Susan Collins, and Diane Feinstein have had the spotlight during these deliberations.  Of all the pols, Lindsay Graham captured the most attention with his tirade against those who opposed Kavanaugh just after Kavanaugh’s own tirade and Ford’s testimony a little more than a week ago.

Frank Bruni comments that Graham has gone from President Trump’s tormenter in the Republican Party to his “slobbering manservant”.   Here is an excerpt:

“But Graham is special. He really is. I can’t think of another Republican whose journey from anti-Trump outrage to pro-Trump obsequiousness was quite so illogical or half as sad, and his conduct during the war over Kavanaugh completed it. For the president he fought overtime, he fought nasty and he fought without nuance.

In so doing, he distilled our rotten politics — its transactional nature, its tribal fury, its hysterical pitch — as neatly as anybody in the current Congress does.

Has a diva at La Scala ever delivered an aria as overwrought as the one that Graham performed on the day when both Christine Blasey Ford and Brett Kavanaugh testified before the Senate Judiciary Committee? I doubt it.

“Boy, you all want power,” Graham, who serves on the committee, railed at his Democratic colleagues, accusing them of ginning up accusations against Kavanaugh. “God, I hope you never get it.” Because Graham and his fellow Republicans exercise it so much more responsibly? Because they’re so principled themselves? I guess that’s why they minimize Russian interference in our elections; indulge Trump’s bromances with Vladimir Putin, Rodrigo Duterte and Kim Jong-un; and smile upon his mendacity, misogyny, racism and unchecked greed. They’re modeling integrity in government.

“You want this seat?” Graham said to them. “I hope you never get it.” No, Senator Graham, you do more than hope. You cheat. Let me introduce you to Merrick Garland, a figure far less partisan than Kavanaugh and thus much more deserving of a seat on the highest court in the land. You and your Republican colleagues in the Senate, every bit as desirous of power as Democrats are, crushed him, and the fact that it didn’t involve an attack on his reputation doesn’t diminish its ruthlessness.”

“Graham’s smearing of Christine Blasey Ford and the Democrats who championed her was so vehement that he earned public raves from Rudy Giuliani, Sarah Huckabee Sanders, Eric Trump and Sean Hannity.

They and the president are his constituency now, and his agenda? According to a few people who know him well, he’s auditioning for attorney general.

Him or Sessions? It’s like deciding whether to be shot or poisoned. And to plunder a quote from a quintessential Washington hack: God, I hope he never gets it.”