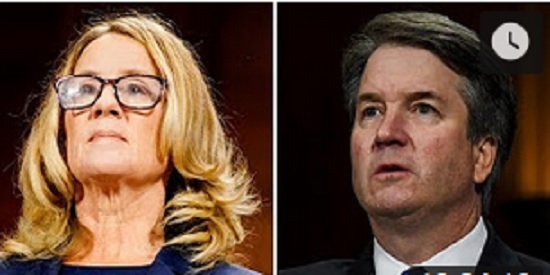 Yesterday the big day came in the Senate Judiciary Committee’s  hearing when Christine Blasey Ford and Brett Kavanaugh testified about the alleged sexual assault on Ford by Kavanaugh.  Both were credible but from the portions I saw, I give the edge to Ford.  She was calm and dignified, where at times Kavanaugh was volatile and extremely hostile to Democrats on the Committee.  She stayed on the issue of the assault, he kept veering into his accomplishments as a judge, a student in high school, getting into Yale Law School, and excelling in sports.  A New York Times editorial gave the day to Ford while Fox News gave it to Kavanaugh and the Republicans on the Judiciary Committee.

As the Times editorial notes,  “the most maddening part of the hearing was the cowardice of the committee’s 11 Republicans, and none of them, apparently, capable of asking Dr. Blasey a single question. They farmed that task out to a sex-crimes prosecutor named Rachel Mitchell, who tried unsuccessfully in five-minute increments to poke holes in Dr. Blasey’s story. Eventually, as Judge Kavanaugh testified, the Republican senators ventured out from behind their shield. Doubtless seeking to ape President’s Trump style and win his approval, they began competing with each other to make the most ferocious denunciation of their Democratic colleagues and the most heartfelt declaration of sympathy for Judge Kavanaugh, in a show of empathy far keener than they managed to muster for Dr. Blasey.”

Portions of the hearing are available on youtube and on several news outlets.

P.S.  I learned after my posting that based on yesterday’s hearing, the American Bar Association called on the Senate Judiciary Committee to delay a confirmation vote on Supreme Court nominee Brett Kavanaugh until an FBI investigation can be completed into several claims of sexual misconduct.

“We make this request because of the ABA’s respect for the rule of law and due process under law,” reads the letter, a copy of which was obtained by HuffPost.

“The basic principles that underscore the Senate’s constitutional duty of advice and consent on federal judicial nominees require nothing less than a careful examination of the accusations and facts by the FBI.”

The move is extraordinary in that the ABA gave Kavanaugh a unanimous “well-qualified” rating for the Supreme Court nomination, and the federal judge has boasted that he was “thoroughly vetted” by the lawyers’ group.