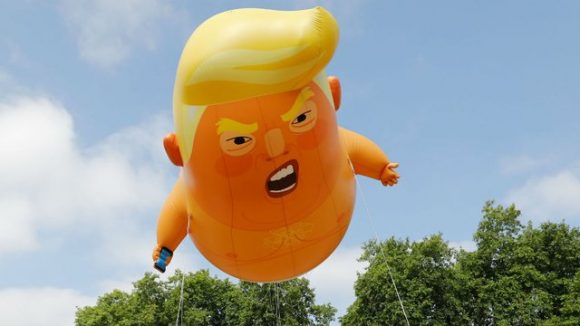 A “Baby Trump” blimp was flying high Saturday at a rally in West Palm Beach near President Donald Trump’s Mar-a-Lago golf resort to mark the one-year anniversary of Hurricane Maria.  As reported in The Huffington Post:

“The 20-foot-high blimp, depicting a chubby Trump as a baby in a diaper apparently having a temper tantrum, was the highlight of the rally of some 800 protesters demanding increased funds to help Puerto Ricans impacted by Maria. The hurricane claimed nearly 3,000 lives.

The rally began with a caravan of protesters driving past Mar-a-Lago waving Puerto Rican flags, blasting music and honking horns before speeches at the Meyer Amphitheater a few miles away. Trump, however, wasn’t at Mar-a-Lago during the event.

The original blimp was first flown in London during for Trump’s visit to the U.K.  in July. There are now six American blimps.

“We shouldn’t have to remind this country to do right by the people of this country,” Gillum told the crowd, The Palm Beach Post reported.

A nonprofit New Jersey Group, The People’s Motorcade, is transporting the family of blimps around the nation for protests against Trump and his policies. The activist organization bought the balloons with money raised on GoFundMe after getting permission to use the blimps from the original Brit creators.

“Baby Trump is a 20-foot-high balloon characterizing the petulant and juvenile nature of Donald Trump,” states the group’s website. “The Brits who created the balloon describe him as a ‘big angry baby with a fragile ego and tiny hands.’”

The statement is signed: “The babysitters.”

If only we could just stick a pin in it and it would all go away.