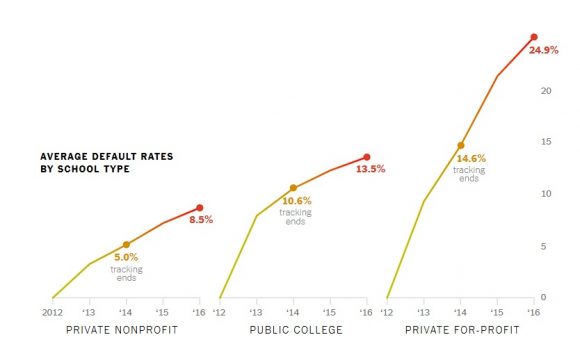 Ben Miller, senior director for postsecondary education at the Center for American Progress, has an op-ed in today’s  New York Times analyzing the college student debt problem.  Here is an excerpt:

“Millions of students will arrive on college campuses soon, and they will share a similar burden: college debt. The typical student borrower will take out $6,600 in a single year, averaging $22,000 in debt by graduation, according to the National Center for Education Statistics.

There are two ways to measure whether borrowers can repay those loans: There’s what the federal government looks at to judge colleges, and then there’s the real story. The latter is coming to light, and it’s not pretty.

Consider the official statistics: Of borrowers who started repaying in 2012, just over 10 percent had defaulted three years later. That’s not too bad — but it’s not the whole story. Federal data never before released shows that the default rate continued climbing to 16 percent over the next two years, after official tracking ended, meaning more than 841,000 borrowers were in default. Nearly as many were severely delinquent or not repaying their loans (for reasons besides going back to school or being in the military). The share of students facing serious struggles rose to 30 percent over all.

Collectively, these borrowers owed over $23 billion, including more than $9 billion in default.

Nationally, those are crisis-level results, and they reveal how colleges are benefiting from billions in financial aid while students are left with debt they cannot repay. The Department of Education recently provided this new data on over 5,000 schools across the country in response to my Freedom of Information Act request.

The new data makes clear that the federal government overlooks early warning signs by focusing solely on default rates over the first three years of repayment. That’s the time period Congress requires the Department of Education to use when calculating default rates.

At that time, about one-quarter of the cohort — or nearly 1.3 million borrowers — were not in default, but were either severely delinquent or not paying their loans. Two years later, many of these borrowers were either still not paying or had defaulted. Nearly 280,000 borrowers defaulted between years three and five.

Federal laws attempting to keep schools accountable are not doing enough to stop loan problems. The law requires that all colleges participating in the student loan program keep their share of borrowers who default below 30 percent for three consecutive years or 40 percent in any single year. We can consider anything above 30 percent to be a “high” default rate. That’s a low bar.

For-profit institutions have particularly awful results. Five years into repayment, 44 percent of borrowers at these schools faced some type of loan distress, including 25 percent who defaulted. Most students who defaulted between three and five years in repayment attended a for-profit college.”

“The federal government, states and institutions also need to make significant investments in college affordability to reduce the number of students who need a loan in the first place. Too many borrowers and defaulters are low-income students, the very people who would receive only grant aid under a rational system for college financing. Forcing these students to borrow has turned one of America’s best investments in socioeconomic mobility — college — into a debt trap for far too many.”