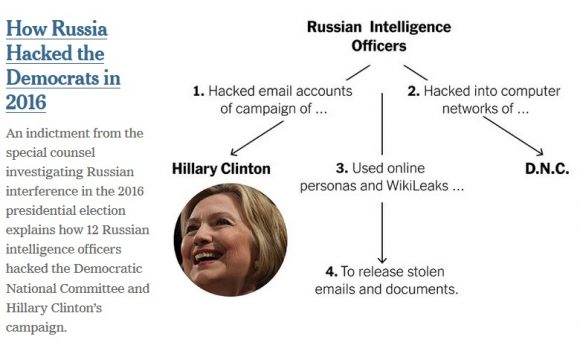 As if a Baby Trump balloon and tens of thousands of Brits protesting the President’s visit to the United Kingdom was not enough yesterday, Special Counsel Robert Mueller issued an indictment of 12 Russian intelligence officers in the hacking of the Democratic National Committee and the Clinton presidential campaign. The indictment comes only three days before President Trump was planning to meet with President Vladimir V. Putin of Russia in Helsinki, Finland.  As reported by the New York Times:

“The 29-page indictment is the most detailed accusation by the American government to date of the Russian government’s interference in the 2016 election, and it includes a litany of brazen Russian subterfuge operations meant to foment chaos in the months before Election Day.

From phishing attacks to gain access to Democratic operatives, to money laundering, to attempts to break into state elections boards, the indictment details a vigorous and complex effort by Russia’s top military intelligence service to sabotage the campaign of Mr. Trump’s Democratic rival, Hillary Clinton.

The timing of the indictment, by Robert S. Mueller III, the special counsel, added a jolt of tension to the already freighted atmosphere surrounding Mr. Trump’s meeting with Mr. Putin. It is all but certain to feed into the conspiratorial views held by the president and some of his allies that Mr. Mueller’s prosecutors are determined to undermine Mr. Trump’s designs for a rapprochement with Russia.

The president has long expressed doubt that Russia was behind the 2016 attacks, and the 11-count indictment illustrates even more the distance between his skepticism and the nearly unanimous views of the intelligence and law enforcement agencies he leads.

“Free and fair elections are hard fought and contentious, and there will always be adversaries who work to exacerbate domestic differences and try to confuse, divide and conquer us,” Rod J. Rosenstein, the deputy attorney general, said Friday during a news conference announcing the indictment.

“So long as we are united in our commitment to the shared values enshrined in the Constitution, they will not succeed,” he said.

It was a striking statement a day after Republican members of Congress, engaging in a shouting match during a hearing, attacked Peter Strzok, the F.B.I. agent who oversaw the early days of the Russia investigation, and questioned the integrity of the Justice Department for what they charged was bias against the president.

The announcement created a bizarre split screen on cable networks of the news conference at the Justice Department and the solemn pageant at Windsor Castle in England, where Mr. Trump and his wife, Melania, were reviewing royal guards with Queen Elizabeth II.Russia has denied that its government had any role in hacking the presidential election, and on Friday, Mr. Trump said he would confront Mr. Putin directly. But the president said he did not expect his Russian counterpart to acknowledge it.

“I don’t think you’ll have any, ‘Gee, I did it, you got me,’” Mr. Trump said during a news conference hours before the indictment was announced. He added that there would not be any “Perry Mason” — a reference to the 1950s and 1960s courtroom TV drama in which Perry Mason, a criminal defense lawyer played by Raymond Burr, often got people to confess. “I will absolutely firmly ask the question.”

But Mr. Trump also said he believed that the focus on Russia’s election meddling and whether his campaign was involved were merely partisan issues that made it more difficult for him to establish closer ties with Mr. Putin.

The Kremlin agreed. A statement on Friday from Russia’s Foreign Ministry said that the indictment was meant to “spoil the atmosphere before the Russian-American summit.”

After the indictment was announced, Senator Chuck Schumer of New York, the Democratic leader, and others in his party called on Mr. Trump to cancel his one-on-one meeting with Mr. Putin.

The indictment, Mr. Schumer said in a statement, was “further proof of what everyone but the president seems to understand: President Putin is an adversary who interfered in our elections to help President Trump win.” He added that “glad-handing with Vladimir Putin” would “be an insult to our democracy.”

The screws are tightening as Mr. Mueller identifies more witches in his investigation.