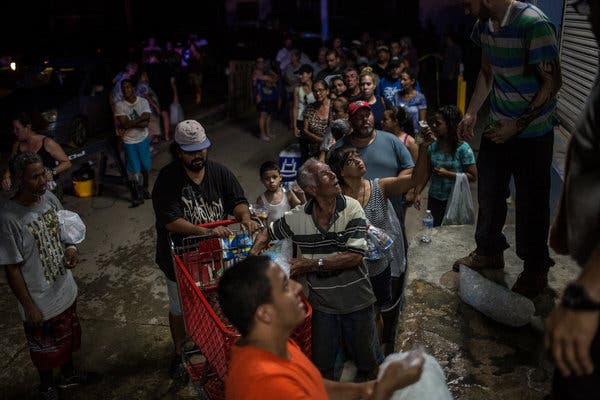 Puerto Ricans lined up for ice in September after Hurricane Maria hit.

Eight months ago, Hurricane Maria leveled Puerto Rico. The response on the part of the United States government was poor at best. The federal government’s official death toll was 64 which nobody has ever believed.  A new report estimates the death toll as more than 70 times larger than the official number and closer to 4,600.  With a new hurricane season beginning, it is time for the federal government to take a genuine interest in our American brethren in Puerto Rico.  Below is a New York Times editorial reviewing the sad conditions on the island.

The Shame in Puerto Rico

It is eight months now since Hurricane Maria ravaged Puerto Rico, leveling 70,000 homes and leaving 3.3 million people without power or water and the health care system in tatters. By any measure, the catastrophe was on a level with Hurricanes Katrina and Sandy, two other storms that devastated large regions of America. But the response, as demonstrated most recently by a report that estimates the death toll as more than 70 times larger than the official one, has been slow and inadequate.

There are various reasons for that, including Puerto Rico’s distance from the United States mainland and local mismanagement, the latter exemplified by an infamous repair contract inexplicably granted soon after the hurricane to a Montana firm with two employees. The bankruptcy of the island has made federal legislators wary of how relief funds are disbursed. But the chief reason has been the perception in Washington, and especially in the White House, of Puerto Rico as a second-class United States territory where poverty, hardship and shoddy government are accepted as the norm.

That was memorably underscored by President Trump in the aftermath of the hurricane, first in his callous tweets assailing the mayor of San Juan, Carmen Yulín Cruz — “they want everything to be done for them” — and then on his visit to the island, where he said Puerto Ricans should be “very proud” that only 16 people had died, unlike the toll in a “real catastrophe” like Katrina, which took 1,833 lives. The official Puerto Rican toll now stands at 64, which nobody has ever believed.

That absurd figure, and that condescension, are what make the study by independent researchers from Harvard and other institutions, published Tuesday in The New England Journal of Medicine, so needed. After surveying random households across the island and comparing mortality rates they encountered to those before Maria, they came up with an estimated 4,645 additional deaths through the end of the year — a third of them people who died for lack of medical care.

Puerto Rico has now commissioned its own study. But the very fact that the official toll was so obviously wrong reflects the disdain that has permeated the response to Maria. A death toll is a critical measure of the scale of a catastrophe, shaping both the public and official response. There is no telling how many lives could have been saved had the federal government been aware of the carnage rather than patting itself on the back. As Mayor Cruz, a sharp critic of the Trump administration’s response, said in an interview in March, Hurricane Maria opened Puerto Rican eyes “to our inequity — and our inequality.”

The island, a commonwealth of the United States whose people are American citizens, remains in need of help. Parts of the island are still without electricity, thousands of residents lack shelter, and much remains in ruins. As many as 135,000 Puerto Ricans have left for the states. As reporters for The Times wrote in a major report in early May, after Maria and a preceding hurricane called Irma, “Puerto Rico all but slipped from the modern era.”

When confronted with the Harvard study, the White House spokeswoman, Sarah Huckabee Sanders, responded with more self-congratulation, claiming that the government had responded to Maria with the largest Federal Emergency Management Agency effort ever. Yet what Puerto Rico really needs to recover is the sort of generous, urgent and long-term assistance that would come with a recognition by the states that a great calamity has befallen their fellow Americans, that these people dying from a lack of the most basic services are their countrymen, their responsibility.