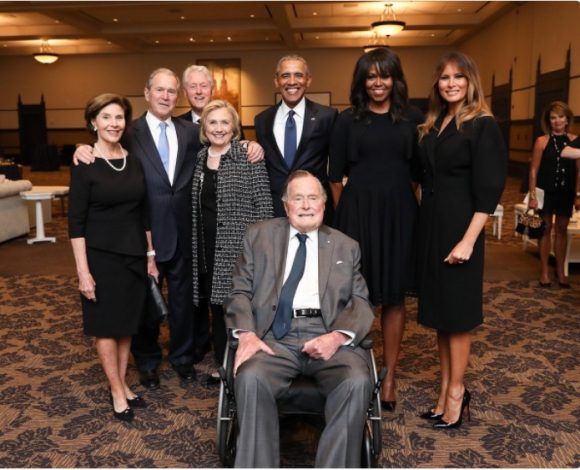 A touching photograph of several generations of presidents paying tribute to the late Barbara Bush is being warmly and widely circulated on social media.

The remarkable photo features four former presidents — Barack Obama, George W. Bush, Bill Clinton and George H. W. Bush — along with first lady Melania Trump and former first ladies Michelle Obama, Laura Bush and Hillary Clinton.
The photo, taken Saturday by Paul Morse, a former White House photographer for George W. Bush, was initially tweeted by Jim McGrath, the spokesperson for George H. W. Bush in his post-White House years.
President Donald Trump is notably absent from the photo, as he did not attend the funeral in Houston on Saturday. The White House released a statement saying he decided not to attend the funeral in order “to avoid disruptions due to added security, and out of respect for the Bush family and friends attending the service.”
The decision was not uncommon for a sitting president. Neither Obama nor the younger Bush attended the funerals of first ladies during their respective terms. Clinton did attend a graveside service for Jacqueline Kennedy Onassis in 1994.
Mrs. Bush deserved it!
Tony
Share on FacebookShare on TwitterShare on Linkedin