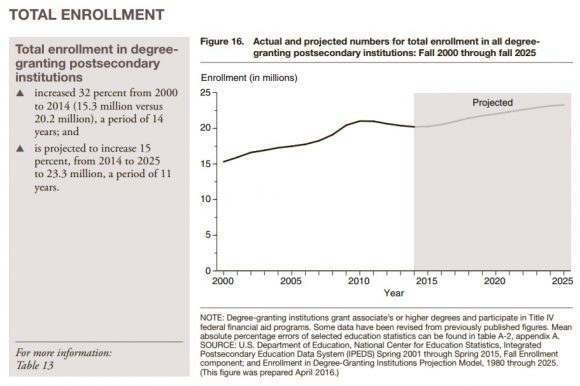 There is an interesting article in today’s Chronicle of Higher Education describing how the University of Maine has been planning for a projected enrollment drop in students over the next several years.  The article mentions that states in the Northeast and New England especially need to plan for enrollment declines.  To quote:

“The number of high-school graduates in Maine is already projected to decline by 9 percent through 2025, according to data from the Western Interstate Commission for Higher Education. But the financial crisis in 2008 also caused a 13-percent drop in the birth rate nationwide that will hit higher education in 2026, according to Nathan D. Grawe, a professor of economics at Carleton College and the author of a new book, Demographics and the Demand for Higher Education. Grawe’s research indicates that Maine, New Hampshire, and Vermont could lose as much as 23 percent of their likely college­goers by 2029.

“New England is looking at a steady trickle downward for the next five or so years, and then they hit a cliff,” Grawe says. “Whatever problems Maine perceives right now in terms of the number of students they have and the institutional resources they have, it looks like it’s just going to get harder.”

The situation in the article is not understated.  However, across the country, enrollments are expected to increase 15 percent through 2025 according to data from the USDOE Institute of Education Sciences published in 2017 (see graphic above).  There is no conflict in the two scenarios because the Northeast and New England is expected to see declines in high school graduates (see graphic below) while the rest of the country is projecting increases.

Regardless of where colleges are geographically located, all will have to pay attention to costs and finances as the push to make higher education more affordable will create pressures on the entire postsecondary community. 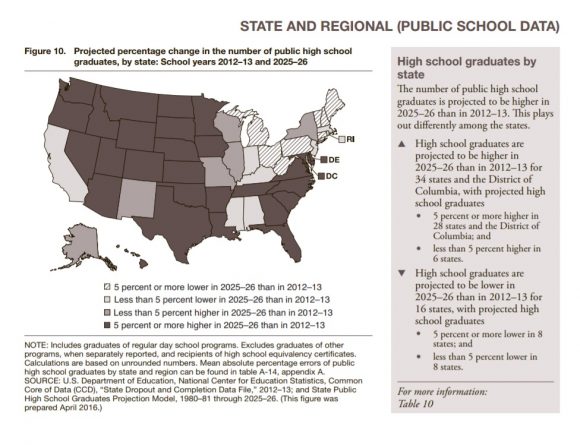