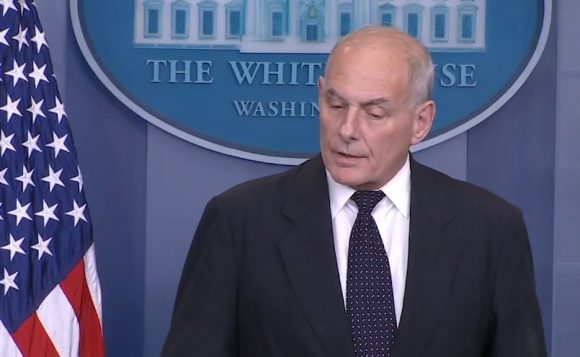 John F. Kelly, the White House chief of staff, delivered a searing, personal defense of President Trump’s phone call this week to the widow of a slain Army soldier, describing yesterday the trauma of learning about his own son’s death in Afghanistan and calling the criticism of Mr. Trump’s condolences unfair.  Mr. Kelly lashed out at Representative Frederica S. Wilson, Democrat of Florida, for publicizing the call between Mr. Trump and Myeshia Johnson, whose husband, Sgt. La David T. Johnson, was one of four American soldiers killed in an Oct. 4 ambush in Niger.  As reported by the New York Times:

“Mr. Kelly accused Ms. Wilson — who was in a car with Ms. Johnson when Mr. Trump called and is a longtime family friend — of being a publicity-seeking opportunist. He said that the congresswoman’s willingness to breach the confidentiality of Mr. Trump’s words is evidence of a broader decline in the values of an American society that no longer treats women, religion, “life” or Gold Star families as sacred.

“It stuns me that a member of Congress would have listened in on that conversation — absolutely stuns me,” Mr. Kelly said during a somber, 18-minute appearance in the White House briefing room. He said that he was so upset by Ms. Wilson’s appearances on TV news shows that he had to collect his thoughts by walking through the graves at Arlington National Cemetery for more than an hour.

Mr. Kelly struck a tone that was more even, if just as powerful. He displayed scorn for a society that he said does not appreciate the sacrifice of those in the military. “Most of you as Americans don’t know them,” he said, bemoaning that “there’s nothing in our country anymore that seems to suggest that selfless service to the nation is not only appropriate but required.”

A retired Marine general whose son Second Lt. Robert Kelly was slain in battle in 2010, Mr. Kelly has long guarded his personal story of loss even as he served as a high-profile public official. He broke that silence in dramatic fashion on Thursday, offering — from his personal and professional experience — a detailed, even excruciating description of what happens to the remains of those killed in combat, and how the grieving families back home are notified.

“Their buddies wrap them up in whatever passes as a shroud,” Mr. Kelly told an unusually hushed room filled with reporters. “They’re packed in ice, typically at the air head, and then they’re flown to — usually Europe, where they’re then packed in ice again and flown to Dover Air Force Base, where Dover takes care of the remains, embalms them, meticulously dresses them in their uniform with the medals that they’ve earned, the emblems of their service.”

He testified to the deep pain that parents feel when they get an early-morning knock on the door from an official to tell them that their son or daughter has been killed in action. “The casualty officer proceeds to break the heart of a family member,” Mr. Kelly said, his eyes reddening as he spoke.

And he described the moment that he got the knock on his own door: A military official telling him that his son “was doing exactly what he wanted to do when he was killed,” Mr. Kelly recalled. “He knew what he was getting into by joining that 1 percent. He knew what the possibilities were because we were at war.”

Peggy Noonan, a former speechwriter for President Ronald Reagan, said Mr. Kelly’s blunt remarks will have impact because of the stark contrast with an administration that has repeatedly lost credibility with the public.

“Its great power was you knew he was telling the truth, and in all specifics,” said Ms. Noonan, a Wall Street Journal columnist. “Kelly comes to the podium and it was credible, and you felt a kind of relief, and respect and gratitude.”

The surprise appearance by Mr. Kelly came after Mr. Trump and the White House were defensively consumed by the president’s actions this week — first, appearing to criticize former presidents for failing to call the families of fallen service members, and later for the words Mr. Trump chose to use in speaking with Sergeant Johnson’s widow.”

Politicizing the death of a slain Army soldier is questionable for a public figure.  However, let’s be fair here, it was Trump who started the politicizing when he criticized former presidents for not contacting the families of our soldiers killed in action.  We hear you Mr. Kelly but you have to call out your boss as well!