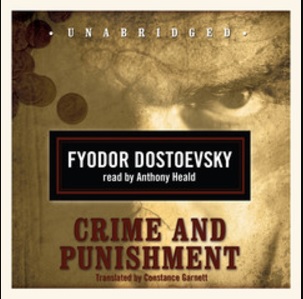 Maureen Dowd had a column yesterday commenting on Robert Mueller’s investigation of President Trump and possible Russian collusion in last’s year election.  She provides a provocative twist by referring to Dostoyevsky’s Crime and Punishment.  Here is a sample:

“As we contemplate crime and punishment in the Trump circle, it should be noted that our Russia-besotted president does share some traits with Dostoyevsky’s spiraling protagonist, Rodion Raskolnikov.

Both men are naifs who arrive and think they have the right to transgress. Both are endlessly fascinating psychological studies: self-regarding, with Napoleon-style grandiosity, and self-incriminating. Both are consumed with chaotic, feverish thoughts as they are pursued by a relentless, suspicious lawman.

But it is highly doubtful that Melania will persuade Donald to confess all to special counsel Robert Mueller III and slink off to Siberia.

We are in for an epic clash between two septuagenarians who both came from wealthy New York families and attended Ivy League schools but couldn’t be more different — the flamboyant flimflam man and the buttoned-down, buttoned-up boy scout. (And we know the president has no idea how to talk to scouts appropriately.)

One has been called America’s straightest arrow. One disdains self-promotion and avoids the press. One married his sweetheart from school days. One was a decorated Marine in Vietnam. One counts patience, humility and honesty as the virtues he lives by and likes to say “You’re only as good as your word.”

Trump biographer Michael D’Antonio says the president has been lying reflexively since he was a kid bragging about home runs he didn’t hit. He gets warped satisfaction from making up stuff, like those calls from the head of the Boy Scouts and the president of Mexico that the White House just admitted never happened.

Back when he was a Page Six playboy, Trump even invented two P.R. guys to play on the phone with reporters, so he could boast about himself three times as much, including fictitious claims of dating Carla Bruni and being hit on by Madonna.

He is never deterred by the fact that he can be easily caught. But considering he survived the “Access Hollywood” video, it’s no wonder he has a distorted sense of what is an existential threat.

Going hammer and tong after hammer and sickle, Mueller has crossed Trump’s Red Line, using multiple grand juries and issuing subpoenas in a comprehensive inquiry covering not only possible campaign collusion but also business dealings by Trump and his associates with Russia. The Times reported Friday that Mueller’s investigators had asked the White House for documents related to Michael Flynn.

A White House adviser told me recently about how scary Mueller’s dream team is, and how Jared Kushner should be nervous. Every time Mueller adds a legal celebrity to his crew, the music gets cued for an “Ocean’s Eleven” or “Dirty Dozen” array of talent. One lawyer helped destroy the New York City mafia; another helped bring down Nixon; another tackled Enron; others are experts on foreign bribery and witness-flipping. As GQ’s Jay Willis wrote, “If these people were coming for you over a parking ticket, you’d be thinking about liquidating your life savings.”

Even before his panting, bodice-ripper of a report came out, Ken Starr was getting dismissed as a partisan Javert. He’s still risible, warning Mueller on CNN Friday that “we do not want investigators and prosecutors out on a fishing expedition.” You know you’re in trouble when Mr. Rod & Reel warns you about going fishing.

Mueller is taken seriously as Mr. Clean Marine, a Republican willing to stand on principle even against other Republicans, as when he and James Comey resisted W. on warrantless wiretapping. Mueller is seen as incorruptible, so his conclusions will most likely be seen as unimpeachable.

Trump does not yet seem to fathom that Mueller is empowered in a way no one else is to look at all sorts of things. This isn’t some tiff over a casino, where Trump can publicly berate opposing counsel and draw him into a public spat. Mueller won’t take the bait.”