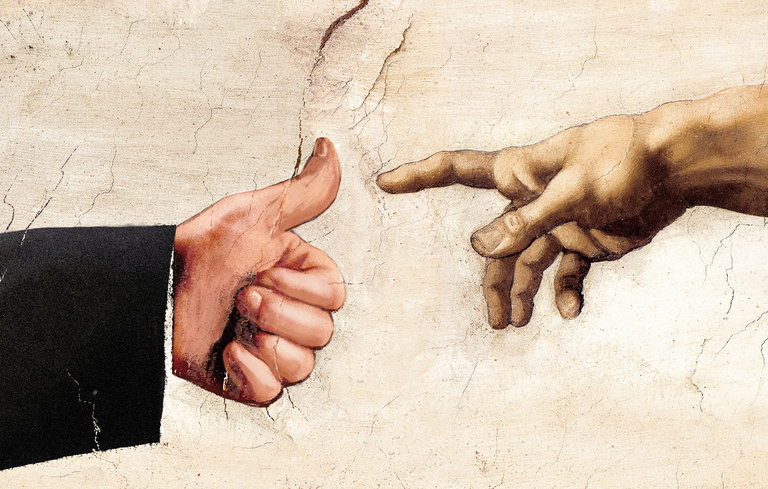 New York Times columnist Frank Bruni comments on Donald Trump’s visit to Saudi Arabia, Israel, and the Vatican. Given the mess he is in, it is fitting that the President is turning to God.  Here is an excerpt:

“He has fled the country — not a moment too soon! — for his first foreign excursion since taking office, and it’s less a conventional presidential trip than a roving seminar in world religions: Islam (Saudi Arabia is the first stop), Judaism (Israel is second) and Roman Catholicism (the Vatican is the capper).

I’m especially eager for his communion with Pope Francis, an entry in the annals of odd couples that ranks somewhere just above Oscar and Felix, and below Mork and Mindy.

One of them is splenetic. The other is ascetic. One sins. The other redeems. Cue the metaphors and clutch your rosary beads.

They’ve a history, these two, and it’s not pretty. During the campaign, Francis denounced the notion of a wall along the Mexican border, and Trump didn’t exactly turn the other cheek. “Disgraceful!” he shot back, confirming his willingness to make an adversary of anyone, no matter how tall the miter.

But they can skip over that and look to future matters like the reportedly imminent nomination of Callista Gingrich as America’s next ambassador to the Vatican. She’s Newt’s third wife, who was sleeping with him when he was still married to his second. Time and, it seems, annulments have washed the couple clean.

The president intended his pilgrimage as a statement that the diverse peoples of the world can and should get along — and that he, Trump, had the stature and sway to point them toward peace. This was to be a moment of bold leadership.

But on the heels of the worst two weeks of a ceaselessly beleaguered presidency, it looks more like a hasty retreat. Plus, there’s the continued wonder — the comedy, really — of watching a man so unabashedly profane pay such ostentatious heed to the sacred…

…Facts are turning out to be as important as attitudes. Every hour brings some fresh mortification for his administration. A special counsel is commencing work. Words like “Watergate” and “obstruction of justice” whip through the air. If I were Trump, I’d probably get out of town, too.

Bruni has captured this presidential moment!