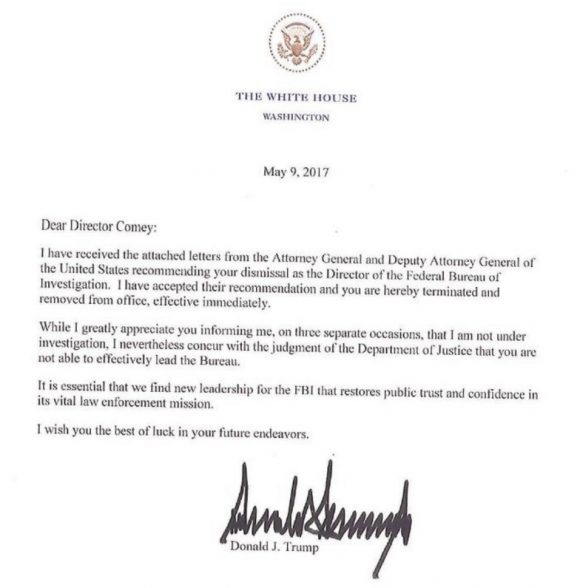 For those of us old enough to remember President Richard Nixon’s firing of Archibald Cox, the special prosecutor looking into the Watergate burglary that would eventually bring Nixon down, there were shades of recollections yesterday when Donald Trump fired FBI Director James Comey who was investigating Trump’s ties to Russia during last year’s election.  Here is the New York Times editorial board take on Trump’s action.

“The American people — not to mention the credibility of the world’s oldest democracy — require a thorough, impartial investigation into the extent of Russia’s meddling with the 2016 presidential election on behalf of Donald Trump and, crucially, whether high-ranking members of Mr. Trump’s campaign colluded in that effort.

By firing the F.B.I. director, James Comey, late Tuesday afternoon, President Trump has cast grave doubt on the viability of any further investigation into what could be one of the biggest political scandals in the country’s history.

The explanation for this shocking move — that Mr. Comey’s bungling of the investigation into Hillary Clinton’s private email server violated longstanding Justice Department policy and profoundly damaged public trust in the agency — is impossible to take at face value. Certainly Mr. Comey deserves all the criticism heaped upon him for his repeated misstepsin that case, but just as certainly, that’s not the reason Mr. Trump fired him.

Mr. Trump had nothing but praise for Mr. Comey when, in the final days of the presidential campaign, he informed Congress that the bureau was reopening the investigation into Mrs. Clinton’s emails. “He brought back his reputation,” Mr. Trump said at the time. “It took a lot of guts.”

Of course, if Mr. Trump truly believed, as he said in his letter of dismissal, that Mr. Comey had undermined “public trust and confidence” in the agency, he could just as well have fired him on his first day in office.

Mr. Comey was fired because he was leading an active investigation that could bring down a president. Though compromised by his own poor judgment, Mr. Comey’s agency has been pursuing ties between the Russian government and Mr. Trump and his associates, with potentially ruinous consequences for the administration.

With congressional Republicans continuing to resist any serious investigation, Mr. Comey’s inquiry was the only aggressive effort to get to the bottom of Russia’s ties to the Trump campaign. So far, the scandal has engulfed Paul Manafort, one of Mr. Trump’s campaign managers; Roger Stone, a longtime confidant; Carter Page, one of the campaign’s early foreign-policy advisers; Michael Flynn, who was forced out as national security adviser; and Attorney General Jeff Sessions, who recused himself in March from the Russia inquiry after failing to disclose during his confirmation hearings that he had met twice during the campaign with the Russian ambassador to the United States.

We have said that Mr. Comey’s atrocious handling of the Clinton email investigation, which arguably tipped the election to Mr. Trump, proved that he could not be trusted to be neutral, and that the only credible course of action would be the appointment of a special prosecutor. Given all that has happened — the firing of the F.B.I. director, on top of Mr. Trump’s firing of the acting attorney general, Sally Yates, and his dismissal of nearly all United States attorneys — the need for such a prosecutor is plainer than ever. Because Mr. Sessions is recused, the decision to name a special prosecutor falls to Deputy Attorney General Rod Rosenstein, whose memo, along with a separate one by Mr. Sessions, provided Mr. Trump with the pretense to fire Mr. Comey.

This is a tense and uncertain time in the nation’s history. The president of the United States, who is no more above the law than any other citizen, has now decisively crippled the F.B.I.’s ability to carry out an investigation of him and his associates. There is no guarantee that Mr. Comey’s replacement, who will be chosen by Mr. Trump, will continue that investigation; in fact, there are already hints to the contrary.

The obvious historical parallel to Mr. Trump’s action was the so-called Saturday Night Massacre in October 1973, when President Richard Nixon ordered the firing of the special prosecutor investigating Watergate, prompting the principled resignations of the attorney general and his deputy. But now, there is no special prosecutor in place to determine whether the public trust has been violated, and whether the presidency was effectively stolen by a hostile foreign power. For that reason, the country has reached an even more perilous moment.”

A special investigation can only happen if Republicans break party ranks and join Democrats in insisting on a special prosecutor.  I would be surprised if enough Republicans are willing to do this.