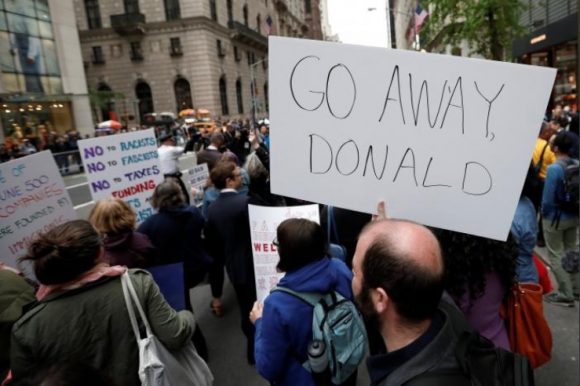 Since he became president, yesterday was arguably the best day for Donald Trump and the Republican Party with the approval of a House bill to repeal the Affordable Care Act. The GOP has been trying to do this for about seven years but congressmen within the Party could never agree.  Yesterday’s vote of  217 to 213, held on President Trump’s 105th day in office, was a significant step on what could be a long legislative road for the party’s dream of unwinding President Barack Obama’s signature domestic achievement.  Twenty Republican Congressmen voted against the bill which now goes to the U.S. Senate where it will surely be modified.

Here in New York, Trump on his first visit  since becoming President was booed wherever he went.  As reported by Reuters.

“The presidential motorcade passed hundreds of demonstrators as it arrived at the decommissioned aircraft carrier Intrepid in the early evening for a meeting with Australian Prime Minister Malcolm Turnbull hours after it was originally scheduled.

…Trump’s role in efforts to scrap the signature domestic achievement of his Democratic predecessor, Barack Obama, further incensed the protesters.

Among those on the street were members of the New York State Nurses Association, who chanted: “What do we want? Health care! When do we want it? Now!”

Demonstrators from the Working Families Party spent much of the afternoon rallying and marching near the Intrepid, now a floating museum on Manhattan’s West Side, banging pans, chanting: “Not my president” and carrying signs including one that read: “This village doesn’t want its idiot back!”

The demonstrations, which included other groups throughout Manhattan, were reminiscent of the weeks after Trump’s Nov. 8 election when frequent protests took place outside his home in the Fifth Avenue tower that bears his name.

The first 100 days since the Jan. 20 inauguration of the businessman-turned-politician brought rollbacks of environmental regulations and crackdowns on immigrants, none of which play well in the liberal Northeast city.

Fewer than one in five residents in the United States’ most populous city voted for Trump, even though he comes from its Queens borough, built a real estate brand and other ventures associated with New York, and has been fodder for its tabloid newspapers for decades.” 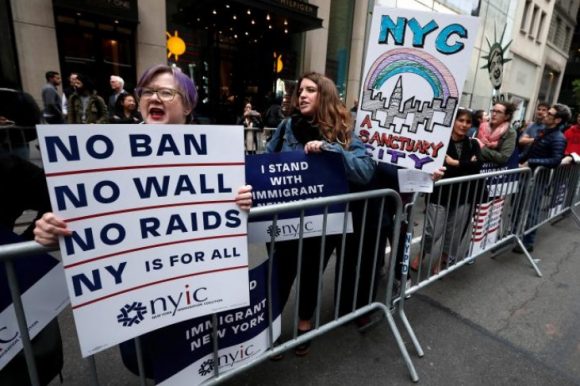 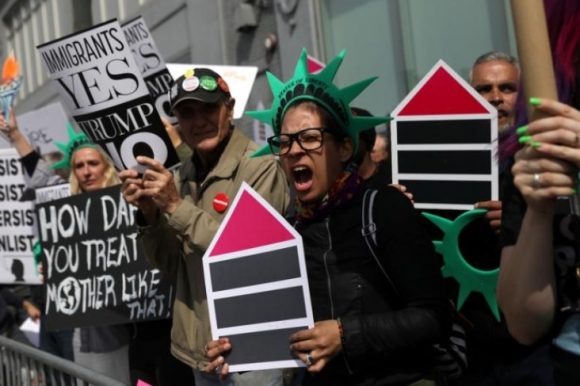