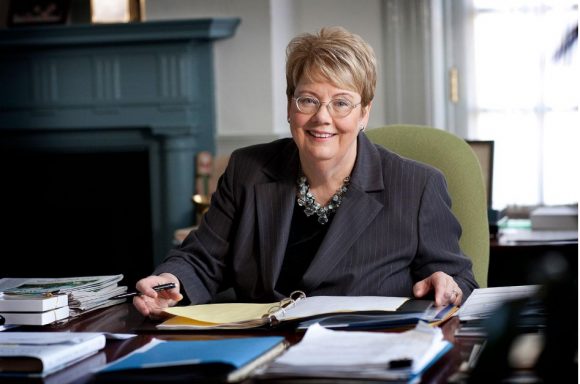 Last Friday, Teresa Sullivan anounced her resignation as president of the University of Virginia.  With the help of faculty, students,  and alumni, she faced down a hostile and intrusive governing board in 2012 and became a national figure.  As reported in The Chronicle of Higher Education:

“Teresa A. Sullivan’s announcement Friday that she will step down as leader of the University of Virginia brings to a denouement one of higher education’s most turbulent and closely-watched presidencies.

Ms. Sullivan has been in office for seven years, and her tenure can be read as a laundry list of the sternest challenges buffeting college leaders during that time — the push to embrace online courses, the increasingly corporate mind-set of boards, concerns over the racial climate on and around campuses, and the fight over how best to prevent campus sexual assault.

In a written statement asking the university’s governing board to start the process of determining her successor, Ms. Sullivan did not provide a precise reason for her pending departure, but she noted that her current contract expires in 2018. A spokesman for the university did not respond to an email late Friday seeking more information about the reasons for her departure, and the rector of the Board of Visitors declined an interview request.

The university is “strong and positioned for even greater strength in our educational offerings, research programs, and health system,” she wrote. “Given this strength, UVa is well-positioned for a transition to its ninth president.”

In the summer of 2012 it seemed unlikely that Ms. Sullivan, UVa’s first female president, would be in position to write such a note more than four years later.

She abruptly resigned that June, citing a “philosophical difference of opinion” with the university’s Board of Visitors, whose rector, Helen E. Dragas, had led a campaign to oust her. Two tumultuous weeks later, after faculty, students, and alumni rallied to Ms. Sullivan’s defense, the board took the unusual step of reinstating her as president.

Her removal and comeback captured national attention beyond the realm of academe, mostly because of UVa’s prestige and history. But college professors, administrators, and governance experts paid particularly close attention to the president’s unceremonious ouster, which functioned as a cautionary tale of board overreach.

In a scathing report, an investigative panel of the American Association of University Professors said that the board’s actions demonstrated a “failure of judgment and, alas, of common sense.” The full board never met to vote on Ms. Sullivan’s forced resignation, and its leaders gave precious few details about their rationale for wanting a popular president gone.

Larry G. Gerber, who was chairman of the AAUP’s Committee on College and University Governance at the time of the report, said that the Virginia case highlights the folly of boards acting without consideration for bedrock principles of shared governance.

“The final authority is in the board; that’s indisputable,” Mr. Gerber said. “But the board is not supposed to act unilaterally without appropriate input, especially from faculty and other constituencies.”

What was most astonishing about Ms. Sullivan’s ordeal was how it ended. Longtime observers of higher education say that they are hard-pressed to recall an occasion when a board reversed a presidential ouster, as happened at UVa.”

We wish Sullivan well in her future endeavors.