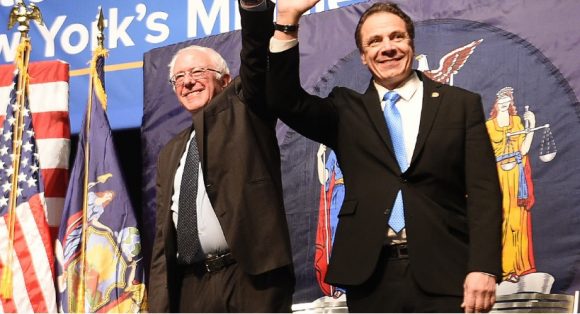 While the details are still sketchy, New York Governor Andrew Cuomo is preparing a proposal for free tuition for all CUNY and SUNY students whose family incomes are below $125,000. per year.  What is also significant is that Bernie Sanders was at his side during the announcement which was made at CUNY’s LaGuardia Community College.  I would speculate that this is Cuomo’s throwing his hat into national politics and a potential presidential run in 2020.

Below is a message from Professional Staff Congress President Barbara Bowen.

Governor Andrew Cuomo has announced a proposal to provide free tuition at CUNY and SUNY schools for students with annual family incomes below $125,000. He made the announcement this morning alongside Senator Bernie Sanders at LaGuardia Community College. Here is the PoliticoNY coverage and here is the news release and video from the Governor’s Office. President Bowen was at the event with members of the LaGuardia Community College PSC chapter. The union has released this statement to press:

Governor Cuomo’s proposal to offer free tuition to CUNY and SUNY students is a conceptual and political breakthrough: it names free tuition at public colleges as the new standard to which states should aspire. The proposal for Excelsior Scholarships has the potential to improve the lives of millions of New Yorkers. At a moment when college costs are rising, student debt is out of control and Americans are wary of what the future holds, New York State can re-set the national agenda for college education by enacting a fully funded investment in free public college education for low- and middle-income students. Everyone in the state will benefit if college education is in reach for all.

Now is the moment to make a similarly bold commitment to providing the resources CUNY and SUNY need to fulfill the Governor’s promise to students. To enable students to graduate within two or four years, CUNY will need to be able to offer essential courses, support services and academic resources. We urge the governor to take this opportunity to articulate an equally visionary agenda for public higher education investment.

The PSC looks forward to learning the details of the proposed Excelsior Scholarship and will work with the Governor’s Office and the Legislature to support it. We also look forward to an Executive Budget that includes funding not only for free tuition but for increased investment in public higher education. New York could ensure national leadership on higher education by coupling the proposal for Excelsior Scholarships with a commitment to fully funded public universities.

As a union committed to economic and racial justice, the PSC echoes Senator Bernie Sanders’ support for the proposal and his praise for the promise of publicly funded free, high-quality college education. We will look forward to working with the governor and the legislature to make that promise a reality.