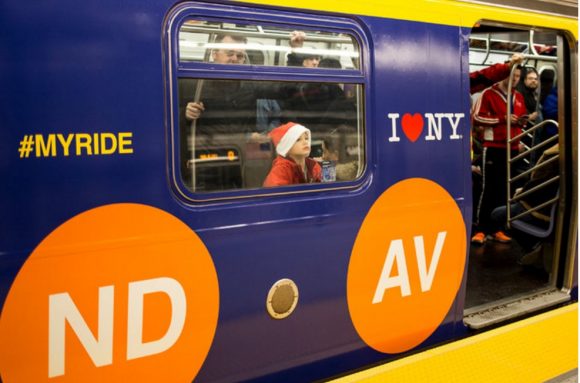 Last Sunday was a major milestone in New York City’s transportation history. With much fanfare, Governor Andrew Cuomo and a host of other government officials took the first ride on the new 2nd Avenue subway.  Even though most New Yorkers love to complain about it, the fact is that they appreciate their subway system.  Since 1904, it has been getting them from one place to another.

I have been taking the subway my entire life.  My father never learned to drive a car. As a family, we traveled everywhere on the rails.  I took a subway fifteen stops to grammar school from 6th through 8th grades (1959-1961) and I like to say it was there I really learned how to read. Every morning and every afternoon I had fifty minutes to read at least one chapter of a paperback novel that only cost about fifteen cents back then.

The new 2nd Avenue subway will be a welcome addition for Eastside riders. Compliments of the New York Times, below is a chronology of the building of the subway.

It has been a long time coming!

Milestones in the Building of the Second Avenue Subway

A Second Avenue subway has long been needed in Manhattan. It just took awhile to make it happen. Over nearly a century, the project has advanced in fits and starts. On Sunday, the first segment finally opened to the public, with three new stations on the Upper East Side.

Building a subway along Second Avenue is recommended by an official in New York City named Daniel L. Turner as part of an ambitious plan to expand the city’s transit system.

The city’s transportation board proposes a Second Avenue subway line from Houston Street to the Harlem River at a cost of $800 million, with a possible connection to the Bronx. A short time later, the stock market crashes, and the plans are shelved.

The Second Avenue elevated train line on the Upper East Side is dismantled. A new plan for a Second Avenue subway line moves forward.

A bond issued is approved to spend $500 million on the subway, but the funds are instead used to improve the existing system. The Third Avenue elevated line is removed.

A Second Avenue groundbreaking is held at 103rd Street, and construction begins on a line that would run along most of Manhattan’s East Side. Then New York City nearly goes bankrupt, and work is halted. Three pieces of the tunnel had already been built near Canal Street, 105th Street and 120th Street.

Another push begins to build a Second Avenue line, though a smaller segment is proposed from 63rd Street to 96th Street.

The Metropolitan Transportation Authority reaches a funding agreement with the federal government to pay for the line. Construction begins.

A 200-ton tunnel boring machine begins to dig underground at 92nd Street and Second Avenue to make way for the line. It finishes about a year later at 63rd Street and Third Avenue, having mined nearly 15,000 feet.

The first section of the Second Avenue subway opens to the public.