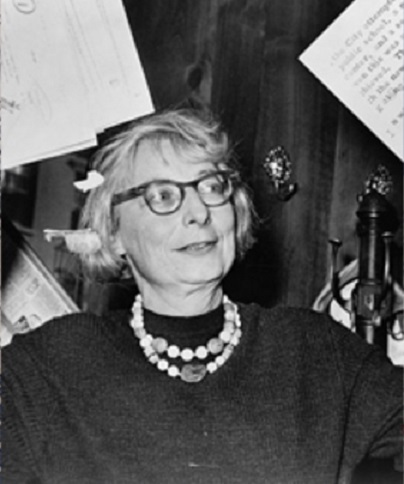 I have just finished reading Eyes on the Street:  The Life of Jane Jacobs (Alfred E. Knopf, 2016) by Robert Kanigel.  I found it to be a good – not great – book.  It provides insights into Jacobs’ early life in Scranton, working as a struggling writer in New York City, the publication of her best-known book, The Death and Life of American Cities, her battles with City planners over public housing projects, and her move to Toronto in 1968.  Kanigel could have done more with Jacobs’ opposition to Robert Moses over the Lower Manhattan Expressway.

Jacobs had a keen eye for urban “communities”.  She understood well that the old, mostly ethnic neighborhoods with their small stores and social clubs provided important lifelines for their people to enjoy, share, and be with each other.   Two and three generations of families formed the fabric of these neighborhoods.  She strongly objected to urban renewal projects which only focused on building housing and apartments without considering small commercial enterprises. She thought  neighborhoods should be improved incrementally and not gutted and completely rebuilt. Jacobs was met with a great deal of opposition but was able to prevail in a number of battles with architects and urban planners.

Her battle with Robert Moses over the Lower Manhattan Expressway (LOMEX) is legendary but there are few new insights in this biography.  For readers who do not know its story, LOMEX would connect the Manhattan and Williamsburg Bridges to the Holland Tunnel. It would have cut through SoHo, parts of Chinatown and Little Italy, and the plan was ultimately nixed in 1962 due to widespread disapproval from the public, led in part by Jane Jacobs. A comparable project was the Cross Bronx Expressway built in the 1950s that connects the Throgs Neck and Whitestone Bridges to the George Washington Bridge.  The Cross Bronx Expressway destroyed a dozen or more old neighborhoods right in the heart of the borough and the area has never recovered.  The Bronx did not have a Jane Jacobs.

Jacobs’ story ends in Toronto where she lived the latter part of her adult life.  She left New York when her eldest son was turning eighteen.  She and her husband, Bob, were concerned that their sons were coming of draft age and did not want to take the chance that they would end up fighting in Vietnam.

Eyes on the Street received mixed reviews when it was released earlier this year. A complimentary  NPR review of the book can be found at:  http://www.npr.org/2016/09/28/495615064/eyes-on-the-street-details-jane-jacobs-efforts-to-put-cities-first