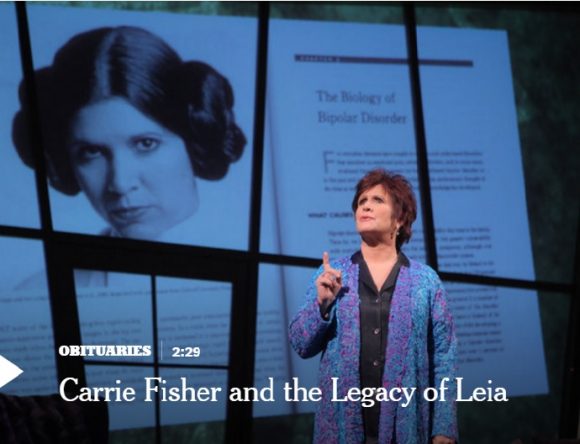 It was very sad news yesterday when the world learned of Carrie Fisher’s death.  My family (three generations) are fans of Star Wars.  My children, Michael and Dawn Marie,  growing up in the 1970s-80s could not wait for the latest installments.  They went to Halloween parties dressed as C-3PO and R2-D2.  Carrie Fisher, as Princess Leia in the earlier movies, transformed what was normally a hero’s role reserved for a male actor to a tough-minded heroine.  Last week with my daughter and grandchildren visiting from Seattle, we all went to see the latest Star Wars movie – Rogue 1. It was special that Fisher as Princess Leia was in the last scene and had the last line.  Here is an excerpt from her obituary.

“Carrie Fisher, the actress, author and screenwriter who brought a rare combination of nerve, grit and hopefulness to her most indelible role, as Princess Leia in the “Star Wars” movie franchise, died on Tuesday morning. She was 60.

A family spokesman, Simon Halls, said Ms. Fisher died at 8:55 a.m. She had a heart attack on a flight from London to Los Angeles on Friday and had been hospitalized in Los Angeles.

After her “Star Wars” success, Ms. Fisher, the daughter of the pop singer Eddie Fisher and the actress Debbie Reynolds, went on to use her perch among Hollywood royalty to offer wry commentary in her books on the paradoxes and absurdities of the entertainment industry.

“Star Wars,” released in 1977, turned her overnight into an international movie star. The film, written and directed by George Lucas, traveled around the world, breaking box-office records. It proved to be the first installment of a blockbuster series whose vivid, even preposterous characters — living “a long time ago in a galaxy far, far away,” as the opening sequence announced — became pop culture legends and the progenitors of a merchandising bonanza.

Ms. Fisher established Princess Leia as a damsel who could very much deal with her own distress, whether facing down the villainy of the dreaded Darth Vader or the romantic interests of the roguish smuggler Han Solo.

Wielding blaster pistols, piloting futuristic vehicles and, to her occasional chagrin, wearing strange hairdos and a revealing metal bikini, she reprised the role in three more films — “The Empire Strikes Back” in 1980, “Return of the Jedi” in 1983 and, 32 years later, “Star Wars: The Force Awakens,” by which time Leia had become a hard-bitten general.

Lucasfilm said on Tuesday that Ms. Fisher had completed her work in an as-yet-untitled eighth episode of the main “Star Wars” saga, which is scheduled to be released in December 2017.

Winning the admiration of countless fans, Ms. Fisher never played Leia as helpless. She had the toughness to escape the clutches of the monstrous gangster Jabba the Hutt and the tenderness to tell Han Solo, as he is about to be frozen in carbonite, “I love you.” (Solo, played by Harrison Ford, caddishly replies, “I know.”)

Offscreen, Ms. Fisher was open about her diagnosis of bipolar disorder. She gave her dueling dispositions the nicknames Roy (“the wild ride of a mood,” she said) and Pam (“who stands on the shore and sobs”). She channeled her struggles with depression and substance abuse into fiercely comic works, including the semiautobiographical novel “Postcards From the Edge” and the one-woman show “Wishful Drinking,” which she turned into a memoir.

For all the attention she received for playing Princess Leia, Ms. Fisher enjoyed poking wicked fun at the character, as well as at the fantastical “Star Wars” universe. “Who wears that much lip gloss into battle?” she asked in a recent memoir, “The Princess Diarist.”

Having seen fame’s light and dark sides, Ms. Fisher did not take it too seriously, or consider it an enduring commodity.”

The force was with her!