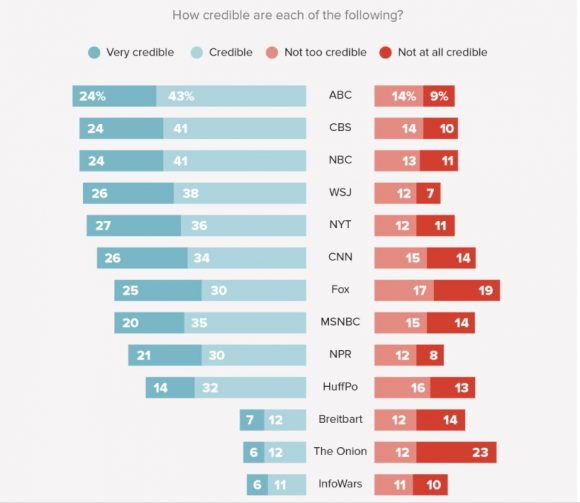 As reported by Business Insider, the online polling firm Morning Consult released the results of a survey yesterday of the most and least trusted news sources in America.

ABC had the highest credibility rating of any news source included in the poll, with 67% of people calling it “credible” or “very credible.”

CNN, which President-elect Donald Trump often derided as the “Clinton News Network” during the election campaign season, was ranked in the middle of the pack, below ABC, CBS, and NBC, but above Fox and MSNBC.

The Wall Street Journal was the highest-ranked newspaper on the list.

InfoWars and Breitbart were near the bottom of the list along with The Onion, a satirical website. Breitbart, which was run by Trump’s eventual campaign chair, Steve Bannon, provided staunchly pro-Trump coverage during the campaign. InfoWars, run by Alex Jones, has been known to spread conspiracy theories.

Nearly half of those surveyed said they’d never heard of InfoWars and Breitbart.

Morning Consult polled 1,605 adults on December 1 and 2. The margin of error is 2 percentage points.

Pew Research Center conducted a similar survey in 2014. It included more news outlets and put The Economist and the BBC at the top of the list as the most trustworthy outlets. ABC, CBS, and NBC were lumped in together below The Wall Street Journal and NPR.