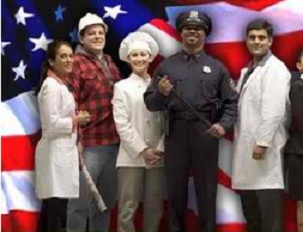 America Was Built on Labor!

Below is a letter from Randi Weingarten, President of the AFT, calling its membership to action on this Labor Day.

Today is Labor Day—and there’s a good reason it’s a national holiday. By organizing together and fighting collectively, workers have been able to better their lives and the lives of their families. So rather than think about Labor Day as the last gasp of summer or bemoan the loss of union clout, let’s redouble our efforts to recreate an enduring middle class.

Wages for workers have barely budged in three decades, something our members know all too well. Income and wealth inequality rivals levels last seen in the Gilded Age. The American dream has slipped away from those who are working hard to make it.

And rather than confronting these realities, many, particularly on the right, engaged in trickle-down magical thinking. And, when that didn’t work, they turned to union bashing and restricting labor rights that rendered workers powerless to address inequities. The result: stagnating wages and stifled hopes for men and women who worked hard and played by the rules.

But we continue to fight—for higher wages, fair contracts, professional development, safety measures, and resources for our members and their students, their patients and the others they serve.

So this Labor Day, tell your members of Congress that when unions are strong, America is strong, and urge them to support policies that make it easier, not harder, to join a union.

America’s educators, healthcare professionals and public service workers know this firsthand. After the Great Recession, some on the right seized the political moment to vilify teachers and assault the labor movement that gives them a voice. A study by the University of Utah showed that, in the four states that successfully weakened teachers’ right to bargain together, public school teachers’ wages fell by nearly one-tenth. That’s a statistic we as educators and public employees simply cannot afford.

Conversely, robust unions help everyone, not just members, and a growing body of research demonstrates that. There’s a multiplier effect. Unions lift up communities, strengthen the economy and deepen our democracy.

Last week, the Economic Policy Institute released a study showing that when union membership falls, wages fall for everyone. If unions were as strong today as in 1979, nonunion men with a high school diploma would earn an average of $3,016 more a year. And the Center for American Progress has found that kids who live in communities where unions are strong have a better chance to get ahead.

For those in unions, the advantage is even clearer. Collective bargaining leads to higher wages, economic growth, equality under the law, better public services and a strong public education system—all essential to leveling the playing field for working families. Workers in unions earn, on average, 27 percent more than their nonunion counterparts. The National Women’s Law Center has found unions close the pay gap for women, and the Center for Economic Policy Research has found black workers see outsized gains from union representation. It’s a powerful reminder of the link between organized labor and economic success.

Write your members of Congress today and urge them to stand with American workers and their unions.

You see the union advantage in our advocacy as well. When the recession devastated the construction sector and put millions of Americans out of work, the American labor movement came together with the goal of raising $10 billion to repair the nation’s crumbling infrastructure. Five years later, our members’ pension funds reallocated $16 billion for infrastructure investments, including rehabilitating New York City’s LaGuardia Airport, turning it into a travel hub befitting a great modern city and creating good American jobs in the process.

In the classroom, unions are critical partners in giving kids the chance to succeed. A 2016 study finds where teachers’ unions are strong, districts have a better track record of building the quality of our teaching force—keeping stronger teachers and dismissing those who are not making the grade. Unions fight for the tools, time and trust that educators need to tailor instruction to the needs of our children, to help them reach for and achieve their dreams.

Here at the AFT, we take that work seriously—for example, curating Share My Lesson, a free digital collection of lesson plans and resources for educators used by nearly a million people. In fact, Share My Lesson has more than 750 lessons about Labor Day!

In hospitals and patient care settings across the country, our members and their unions have been leading the fight against workplace violence.

Despite years of right-wing attacks on unions, which have curbed union strength dramatically, a 2015 survey found a majority of Americans would join a union if they had the choice. They want what a union offers: a voice in their workplace, the opportunity to negotiate wages and benefits, and the ability to retire with dignity and security.

Indeed, despite all the attacks waged against us, the AFT—which celebrated our 100th anniversary at our national convention this summer—has grown over the past several years, with well over 1.6 million K-12 and higher education educators and staff, state and local employees, and nurses and other healthcare professionals as members. And now we are seeing more vulnerable workers, such as adjunct faculty, graduate students, teachers at charter schools and early childhood educators seeking to join our ranks. In the private sector, tens of thousands of low-income workers have joined the Fight for 15 and the union movement because they know a union will help them get long-denied wage increases.

We have taken on the fight for adjuncts and early childhood educators from Pennsylvania to California—many of whom have to work multiple jobs just to make ends meet. These are the people who teach our youngest children, and they’re the ones who educate our college students; they deserve to live above the poverty line while doing this critical work.

Graduate students at Cornell University are celebrating the recent National Labor Relations Board decision that reinstates the right of graduate workers at private universities to organize. They are building momentum and talking to hundreds of fellow grad students about the power of collective bargaining, and are excited about the prospect of winning union recognition and joining more than 25,000 AFT graduate employees at public institutions who already enjoy the benefits of a contract.

The AFT has been going strong for 100 years, and we want to ensure at least 100 more years of fighting for our members and the communities they serve. Show your support for a strong labor movement by sending a letter to your elected officials today.

The aftermath of the Great Depression and World War II led our country to understand we were all in it together. We established the GI Bill and other educational access and equity programs; management and labor respected each other, with unions being the voice of labor; and the middle class thrived.

Now, as income inequality is again at its height, let’s remember on this Labor Day what a strong labor movement has done—and can do again—to help workers, our communities, the economy and our democracy grow and thrive. This Labor Day, let’s make sure our elected officials remember as well.

Have a safe and happy Labor Day.