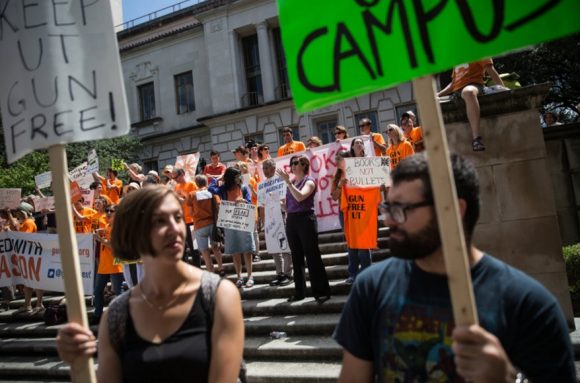 Students at the University of Texas at Austin protested a new law allowing concealed handguns on state college campuses by carrying something they thought was just as ridiculous and out of place: Thousands of sex toys!  As reported by the New York Times:

“On the first day of classes at the University of Texas in this city that revels in its own oddball creativity, students protested a law  allowing concealed handguns on state college campuses by carrying something they thought was just as ridiculous and out of place: Thousands of sex toys.

“These laws won’t protect anyone. The campus doesn’t want them,” said an organizer of the protest, Jessica Jin. “It’s absurd. So, I thought, we have to fight absurdity with absurdity.”

Their plan was to carry the toys openly to class, attached to their backpacks, to show that they think that guns have no place on campus and could stifle the open exchange of ideas.

“For the state to deny research about gun safety and allow this in classrooms is kind of obscene,” Ms. Jin said. “What better way to show how we feel?”

Similar laws and court rulings have allowed guns onto campuses in a handful of others states in recent years, including Idaho and Colorado. The chancellor of the University of Texas system and the president of the flagship university in Austin have said that they are against guns on campus but that they have no choice but to implement the law.

Some faculty members say the administration is trying to limit the effect of gun laws while not antagonizing state lawmakers for fear of future legislation that could loosen gun laws on campus even more.”

To borrow the motto of the 1960s peace movement – “make love not war!”