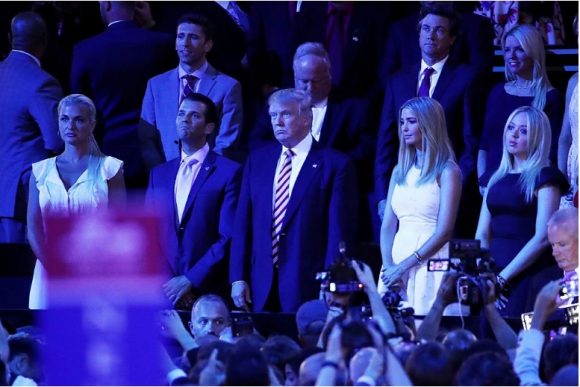 Senator Ted Cruz was booed off the stage after declining to endorse Donald Trump during his speech last night at the Republican Party National Convention and instead told the audience to “vote your conscience” in November.

“To those listening, please, don’t stay home in November,” Cruz said. “Stand, and speak, and vote your conscience, vote for candidates up and down the ticket who you trust to defend our freedom and to be faithful to the Constitution.”

Boos immediately erupted from the audience as attendees started chanting, “We want Trump!”

The photo above snapped by a Getty Images photographer captured the Trump family’s reaction to Cruz’s speech before the Republican National Convention — they looked flabbergasted as did most of the conventioneers and I am sure much of the television audience.

Cruz was warmly welcome by the audience when he first came out.  He started his speech by congratulating Trump on winning the nomination and earned sustained applause as he laid out a conservative agenda for the party.  However, as reported by The Huffington Post:

The restlessness turned to outright jeers when Cruz told the crowd to “vote your conscience” ― a phrase that has been adopted by the group of Republicans who had asked delegates to not coronate Trump as the nominee. And when he declared that Republicans are “fighting, not for one particular candidate or one campaign,” the boos began.

Trump’s children looked on from their box seats, stoic and not applauding.

As the speech entered its closing stages, Cruz had completely lost the crowd. Screams of “endorse” came from the rafters. John Antoniello, the Chairman of the Staten Island GOP, helped lead them.

“It didn’t seem to me he was ever going to say it,” Antoniello told The Huffington Post.

If the situation wasn’t chaotic enough, it rose a level higher in that moment. In an act of pure showmanship, the room’s eyes turned back to that Trump booth. The candidate had perfectly timed his entrance to take away attention from his former primary foe.”

Great theater and so much for party unity!