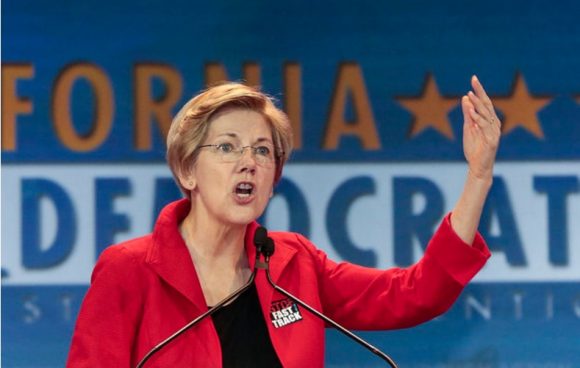 Donald Trump has found his match in the give and take department with Elizabeth Warren.    She amplified her recent attacks on The Donald and admonished him by calling him “a small, insecure money-grubber.”

In a speech yesterday, she recounted the story of a Nevada family whose home was foreclosed at the height of the 2008 economic crisis while accepting an award from the Center for Popular Democracy, an economic justice organization. The story served as a segue into an excoriation of comments Trump made before the crisis, hoping the housing market would crash so he could profit from it.

“I’ll tell you exactly what kind,” Warren continued. “A man who cares about no one but himself. A small, insecure money-grubber who doesn’t care who gets hurt, so long as he makes some money off it. What kind of man does that? A man who will never be president of the United States.”

Warren’s speech filled out a line of attack she has waged against Trump in recent weeks, often on Twitter. Her willingness to target Trump has not gone unnoticed by Democratic presidential front-runner Hillary Clinton’s campaign.

Warren on Tuesday also laid into Trump’s refusal to release his tax returns, which makes him the first major party nominee in more than 40 years to hide the documents from the public. Trump has claimed the returns would reveal nothing. Trump’s 1978 and 1979 returns, which he filed with New Jersey casino regulators, indicated that he paid little to nothing in taxes.

“I want to make just one last point about Donald Trump that won’t fit into a Twitter war, one last point that sums up what Donald Trump is all about — his taxes,” Warren said. “Trump likes being a billionaire and doesn’t think the rules that apply to everyone else should apply to him. But let’s be clear: Donald Trump didn’t get rich on his own.”

Warren argued that Trump, by not paying taxes, has reaped the benefits of services and people that taxes fund.