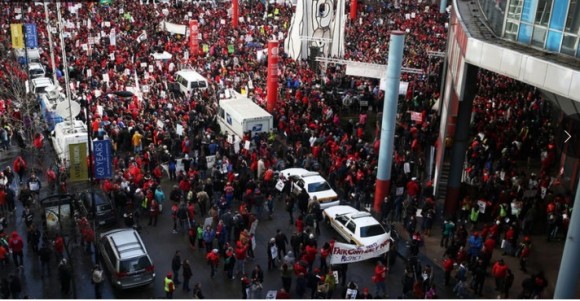 The Chicago Teachers Union held a “Day of Action” strike yesterday that forced the cancellation of classes for more than 300,000 students. In the morning, teachers hoisted signs and chanted outside neighborhood schools. Then they shifted to a series of midday rallies at the city’s college campuses, where demonstrators lambasted the state’s politicians over what they called inadequate funding and support. The one-day walkout was designed to draw attention to the ongoing contract battle between the teachers union and Chicago Public School administrators, who are wrangling over pay, pension and staffing levels in the cash-strapped school district.  As reported in The Chicago Tribune:

“Chicago Teachers Union members and their supporters capped a day of protests by converging in the Loop on Friday afternoon for a rush-hour rally and march.

Teachers gathered at the Thompson Center for a demonstration against budget and program cuts, aiming their frustration at city and state leaders. With the classic Public Enemy song “Fight the Power” blaring, thousands of demonstrators clad in red packed the plaza in front of the state government center.

A cold rain did not dampen the carnival-like atmosphere as teachers, students and their allies cheered on speakers who criticized Gov. Bruce Rauner and Mayor Rahm Emanuel. Police on the scene estimated the crowd to be around 5,000.

“We need funding across the state,” said Denise Racky, a citywide school nurse.”

Congratulations to the Chicago Teachers Union for an effective show of strength and getting their message across.