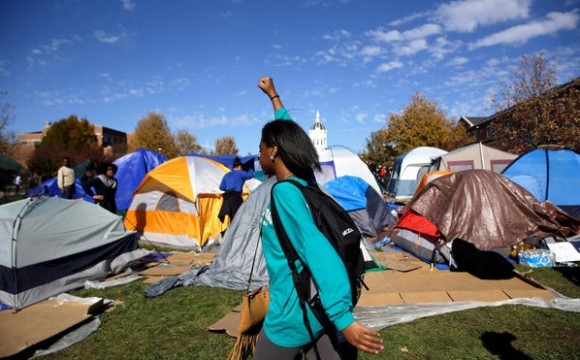 The president of the University of Missouri system and the head of its flagship campus resigned yesterday over what faculty and students saw as indifference to racial tensions at the school. As reported in the Associated Press:

“President Tim Wolfe, a former business executive with no previous experience in academic leadership, took “full responsibility for the frustration” students expressed and said their complaints were “clear” and “real.”

For months, black student groups had complained that Wolfe was unresponsive to racial slurs and other slights on the overwhelmingly white main campus of the state’s four-college system. The complaints came to a head two days ago, when at least 30 black football players announced that they would not play until the president left. A graduate student went on a weeklong hunger strike.

Wolfe’s announcement came at the start of what had been expected to be a lengthy closed-door meeting of the school’s governing board.

“This is not the way change comes about,” he said, alluding to recent protests, in a halting statement that was simultaneously apologetic, clumsy and defiant. “We stopped listening to each other.”

He urged students, faculty and staff to use the resignation “to heal and start talking again to make the changes necessary.”

Hours later, the top administrator of the Columbia campus, Chancellor R. Bowen Loftin, announced that he would step down at the end of the year.

The school’s undergraduate population is 79 percent white and 8 percent black. The state is about 83 percent white and nearly 12 percent black. The Columbia campus is about 120 miles west of Ferguson, Missouri, where Michael Brown was killed last year in a fatal shooting that helped spawn the national “Black Lives Matter” movement rebuking police treatment of minorities.”

The New York Times coverage of the resignations also commented on other issues that arose in the past year at the University.

Months of student and faculty protests over racial tensions and other issues that all but paralyzed the University of Missouri campus culminated Monday in an extraordinary coup for the demonstrators, as the president of the university system resigned and the chancellor of the flagship campus here said he would step down to a less prominent role at the end of the year.

The threat of a boycott by the Missouri football team dealt the highest-profile blow to the president, Timothy M. Wolfe, and the chancellor, R. Bowen Loftin, but anger at the administration had been growing since August, when the university said it would stop paying for health insurance for graduate teaching and research assistants.

It reversed course, but not before the graduate assistants held demonstrations, threatened a walkout, took the first steps toward forming a union and joined forces with students demonstrating against racism.

Then the university came under fire from Republicans for ties its medical schools and medical center had to Planned Parenthood. The university severed those ties, drawing criticism from Democrats that it had caved in to political pressure.

But it was charges of persistent racism, particularly complaints of racial epithets hurled at the student body president, who is black, that sparked the strongest reactions, along with complaints that the administration did not take the problem seriously enough.

Gov. Jay Nixon, a Democrat, said, “Tim Wolfe’s resignation was a necessary step toward healing and reconciliation on the University of Missouri campus, and I appreciate his decision to do so.”

This indeed was a necessary step and indicative of university leadership that failed to act.