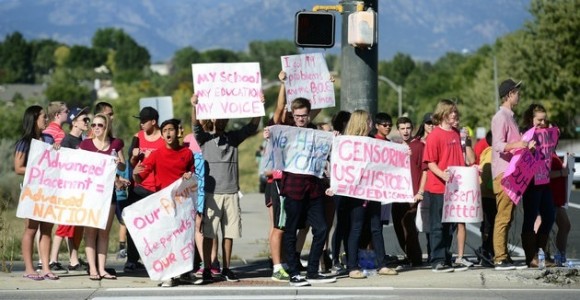 A recall election in Colorado on Tuesday resulted in the dissolution of the conservative majority on the Jefferson County, Colorado school board.  As reported by The Huffington Post:

“The fight in the district was significantly more controversial than a typical school board election. At issue were three members of the board elected in 2013 — Ken Witt, John Newkirk and Julie Williams — who ran on a reform platform of expanding school choice and increasing transparency.

The members’ move in 2014 to review a new Advanced Placement U.S. History curriculum, criticized by Republicans, drew national attention. Williams proposed that the board consider whether teachers should present materials that emphasize “positive aspects of the United States” and respect for authority, free enterprise and individual rights, rather than encouraging or condoning “civil disorder, social strife or disregard of the law.” Hundreds of students walked out of their classrooms and teachers called in sick, shutting down multiple schools in the district.

Though the board didn’t ultimately change the curriculum, acrimony over the majority’s actions continued. Teachers and parents of students in the district have complained about the board’s votes to tie teacher pay to performance and to direct more funds to charter schools.

One of the recall’s organizers told The Huffington Post she was thrilled with the result of the election.

“I believe this sends a strong message to corporate interests (e.g., Americans for Prosperity and the Koch Brothers) and their reformers that our public schools are not for sale!” said Tina Gurdikian, who has a child in the Jefferson County school system. “Looking at the election outcomes … the message is clear — we love and value our public schools; we do not like to have reforms forced down our throats; and we value and expect collaboration, transparency, respect and fiscal accountability from our elected officials.”

The board’s conservative majority was criticized for holding secret meetings and hiring its own lawyer. The district’s longtime superintendent resigned, saying she felt disrespected by the new members.”

Congratulations to the parents and teachers who organized this effort.