For the past five years, enrollments across the country have been declining (as much as 30 percent) in traditional, college-based teacher education programs.  Eduventures, a for-profit research and advisory service for higher-education, presented data last week at the 2015 Annual Fall Meeting of the Council of Academic Deans from Research Education Institutions (CADREI), that discuss the enrollment problems in teacher education programs but also provided rays of hope.  Here is a recap of their presentation:

Enrollments are indeed declining across all teacher preparation programs:

The grim state of traditional teacher preparation programs is also fueled by the growth of alternative models advertising low cost and accelerated completion. These alternatives, in many cases not based in institutions of higher education (IHEs), include state-approved licensure programs based in school districts and providers like the Boston Teacher Residency, TNTP, and the Relay Graduate School of Education. Between 2010 and 2014, the number of alternative providers not based in an IHE grew at an average rate of 6% annually. During the same period, alternative IHE-based providers grew at an average rate of 3.5% annually. 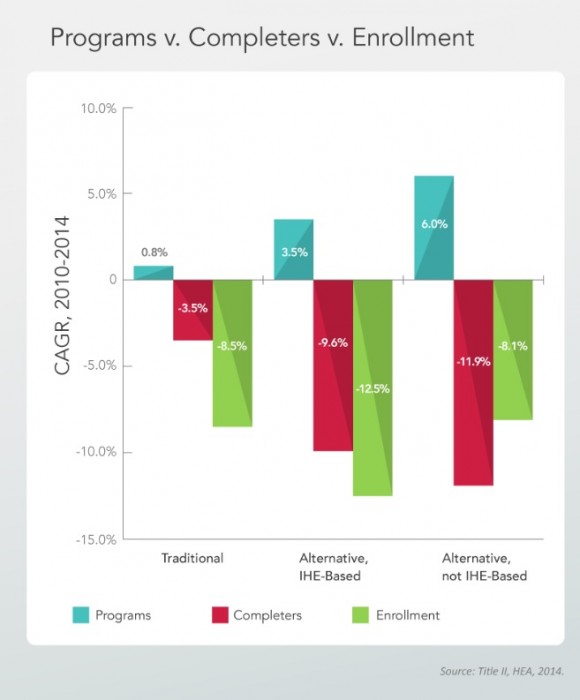 This data show that the future of traditional degree programs may not be so grim and that the bright, shiny, alternative models may not be resonating as much as the national narrative would have us believe.

When it comes to gauging the value of teacher preparation programs, there is no better short-term litmus test than the perceptions of principals who hire their graduates. Eduventures’ 2015 Principal Survey asked 755 P-12 principals about their hiring preferences. 87% of respondents said that traditional preparation was an important factor when evaluating candidates, compared to 54% who said that alternative preparation was an important factor. The current workforce reflects this trend, as nearly 90% of teachers are prepared through traditional preparation programs (e.g., bachelor’s, master’s, and certificate programs), despite declining enrollments. 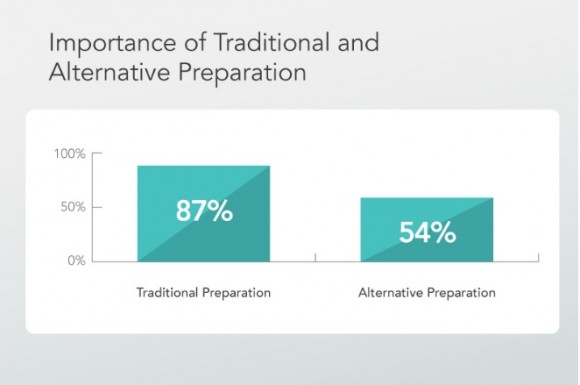 This is not to say that schools of education do not face significant challenges. Enrollments and completions are declining, after all. What this data demonstrates, however, is that traditional teacher preparation programs have a story to tell and need to communicate their value more clearly. As schools of education consider the national landscape of teacher preparation and their own enrollment trends, they should collect and share stories of students and alumni, promote innovative practices and faculty successes, and align their program offerings to the needs of local district partners.

The above and other issues related to teacher education will be presented at the upcoming Eduventures Summit 2015, to be held in November in Cambridge, Massachusetts.