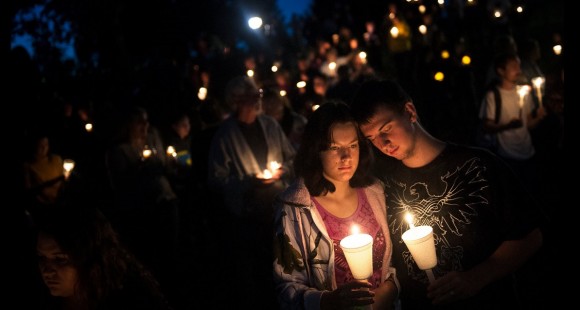 Following the shootings at Umpqua College that resulted in the deaths of nine innocent victims and the gunman, President Obama said yesterday that we have become “numb” and that he is powerless to do anything.  As reported in the New York Times:

“President Obama’s rage about gun massacres, building for years, spilled out Thursday night as he acknowledged his own powerlessness to prevent another tragedy and pleaded with voters to force change themselves.

“So tonight, as those of us who are lucky enough to hug our kids a little closer are thinking about the families who aren’t so fortunate,” the president said in the James S. Brady Press Briefing Room, named for a man severely wounded by a would-be assassin’s bullet, “I’d ask the American people to think about how they can get our government to change these laws, and to save these lives and let these people grow up.”

Mr. Obama admitted that he was unable to do anything to prevent such tragedies by himself. And he did little to try to hide the anger and frustration that have deepened as he returns again and again to the White House lectern in the wake of a deadly mass shooting.

Mr. Obama took a veiled swipe at the National Rifle Association, which has successfully fought most limits on gun use and manufacture and has pushed through legislation in many states making gun ownership far easier. “And I would particularly ask America’s gun owners who are using those guns properly, safely, to hunt for sport, for protecting their families, to think about whether your views are being properly represented by the organization that suggests it is speaking for you,” he said.O

On Thursday afternoon, police officers secured the scene of a mass shooting at Umpqua Community College in Roseburg, Ore.

On Thursday night, Mr. Obama said that given the frequency of mass shootings, people had “become numb to th,is.”

A sad, sorrowful state of affairs!