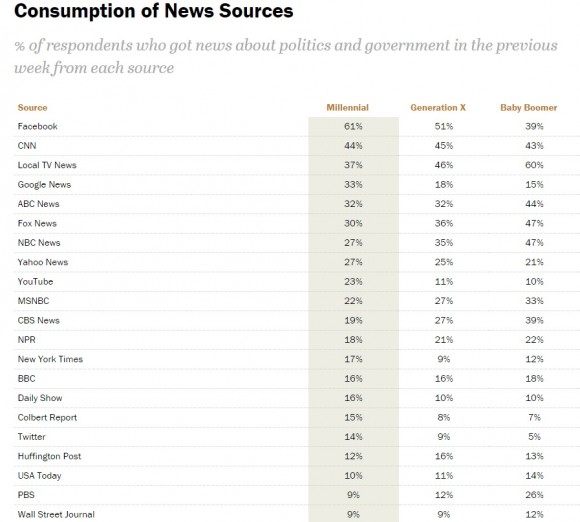 A new survey from the Pew Research Center reveals that 61 percent of American millennials (18 – 33 years old) said that they got political or government-related news from Facebook. That’s considerably higher than the percentage of millennials who said they got news from CNN — 44 percent — and higher still than the 37 percent who said they tuned into local TV for coverage. (See chart above for top 20 sources of political news.) Far fewer baby boomers (50-68 years old) use Facebook in this way: Only 39 percent reported that they got news about politics and government from Facebook in the past week. Meanwhile, 51 percent of Generation X (34 – 49 years old) reported that they get such news from Facebook. As reported in The Huffington Post:

“The survey arrives at a time when Facebook is swiftly becoming a more influential force in the news media. Last month, it began hosting and publishing “Instant Articles” from partner organizations like National Geographic. The aim is to keep consumers within Facebook’s world — rather than clicking over to other websites for their news — while simultaneously delivering quicker article load times and interactive multimedia. Publishers who join forces with Facebook presumably have access to audience targeting tools and shared ad revenue.”

I was well aware that many young people do not read newspapers such as the New York Times or Wall Street Journal. However, I thought a greater percentage of them would be watching television for their news – political or otherwise.  This report is important for those of us in academia who work with the younger generation and make assumptions about how they gather news and other information.