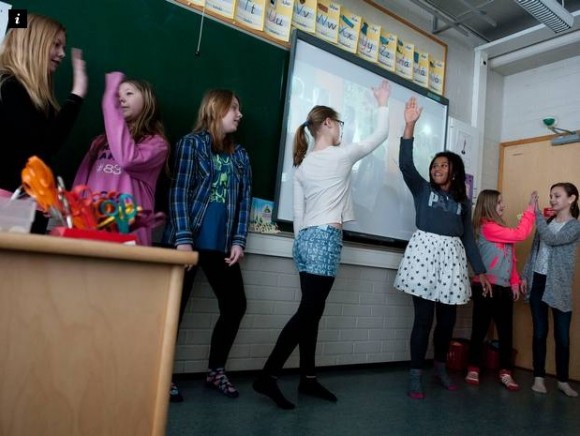 Finland’s education system, often held up as an exemplary model for the rest of the world, is on the verge of making three major changes based on the following themes:  more interdisciplinary study, student-directedness, and collaboration.  As reported in The Huffington Post and The Independent (UK):

Finnish schools will begin reorganizing their classrooms during the 2016-2017 school year based on the country’s new National Curriculum Framework. Some classrooms in Helsinki, the country’s largest city, have already begun the process, according to The Independent.

The National Curriculum Framework serves as a broad outline for educators, and requires that for at least a couple of weeks each year, educators use “phenomenon-based teaching” — an approach that emphasizes broad interdisciplinary topics rather than single-subject classes. Instead of teaching about history or economics, for example, educators could give lessons on the European Union, blending aspects of history and economics, according to The Independent. Schools and localities will be given some degree of freedom over how they implement this method of teaching.

Finland’s students will be involved in planning new, interdisciplinary projects, and will be expected to evaluate their success.

Finnish classrooms will literally be redesigned under the new curriculum framework. Instead of a traditional classroom, where kids sit in rows of desks in front of a teacher, students in the near future will work in clusters to promote communication skills, says The Independent.

A press release from the Finnish National Board of Education also notes that the new approach will emphasize the “joy of learning.”

“The core curriculum is based on the learning conception that positive emotional experiences, collaborative working and interaction as well as creative activity enhance learning,” says the press release.

“Some teachers in Finland see these reforms as a threat and the wrong way to improve teaching and learning in schools,” wrote Pasi Sahlberg, a Finnish education expert, in a blog post reprinted in The Washington Post Thursday. “Other teachers think that breaking down the dominance of traditional subjects and isolation of teaching is an opportunity to [effect] more fundamental change in schools.”

These reforms appear to be in keeping with a lot of other progressive ideas about K-12 education. If implemented well, Finland’s education system will continue to be a model for other countries.