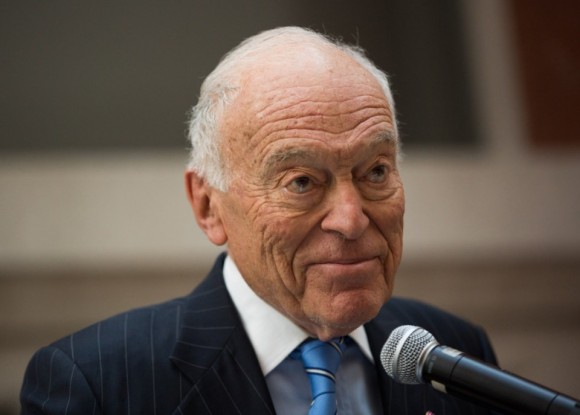 Yesterday, Hunter College announced a $10 million gift from Cosmetics Executive Lawrence Lauder to its School of Nursing. The gift will fund salaries and research to attract academics, provide scholarships for students, and enable the purchase and maintenance of equipment needed for instruction.

It is Mr. Lauder’s largest gift to Hunter and one of the biggest to any school of nursing, according to Hunter’s president, Jennifer Raab. The gift is named in memory of Mr. Lauder’s first wife, Evelyn, who died in 2011 from nongenetic ovarian cancer.

The late Mrs. Lauder went to Hunter College, graduating in 1958 with a degree in anthropology. She also attended Hunter College High School. Her education served as the foundation for her careers as a public-school teacher and an executive at Estée Lauder Cosmetics, the firm founded by Mr. Lauder’s parents.  As reported in The Wall Street Journal:

“In 1993, after she was diagnosed with breast cancer, Evelyn Lauder founded the Breast Cancer Research Foundation (BCRF), a New York-based group that has become a national powerhouse for funding study of the disease.

In a recent interview, Mr. Lauder, 81 years old, said he was motivated to support nursing because of the care his late wife received from intuitive, skilled nurses during her many years in and out of hospitals. “I was hugely impressed with the nursing care, but also impressed with the fact that there weren’t that many young people entering nursing from New York or even from America,” Mr. Lauder said.

With the Affordable Care Act, he said, more people will be able to receive medical attention. To serve that demand, more nurses are needed.

“I have a long-term dream that we should and must have, over the next five to 10 years, more storefront walk-in clinics run by physician’s assistants, the highest level of nursing,” said Mr. Lauder. “If we want to be able to care for our population in the long-run and not skyrocket the cost of medical care, we need to eventually have far more of the services handled by people who are graduates of nursing schools.”

The gift follows several others to Hunter, including donations in support of the arts and regular grants in support of breast-cancer researchers. Mr. Lauder credits Hunter with setting his late wife on a road that has ultimately saved “many thousands of lives” through the work of the BCRF. And, he said, the late Mrs. Lauder, the product of the public education system, was also one of its biggest champions.

This type of gift is something of a departure for Mr. Lauder, who in recent years has earned headlines for his donation of $1 billion in artwork to the Metropolitan Museum of Art and for his support of the Whitney Museum of American Art.

Mr. Lauder said he was now turning more of his focus to two areas that need more attention: breast cancer and Alzheimer’s disease.

In response to a question about whether he has accelerated his giving in recent years, Mr. Lauder said: “Yeah. You can’t take it with you, can you?”