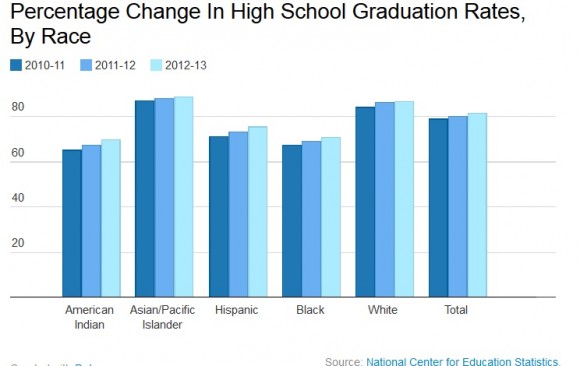 Data released earlier this week by the U.S. Department of Education shows that the high school graduation rates for Hispanic, black, white, American Indian and Asian/Pacific Islander students all increased between the 2010-11 and 2012-13 school years. Even though significantly more white and Asian/Pacific Islander students are graduating from high school than their Hispanic, black and American Indian peers, achievement gaps in this area still appear to be closing.

The release of this data comes a month after the DOE announced that national high school graduation rates had reached a historic high. During the 2012-13 school year, 81 percent of American students graduated from high school in four years.  As reported in The Huffington Post:

“America’s students have achieved another record-setting milestone,” Secretary of Education Arne Duncan said in a statement last month. “We can take pride as a nation in knowing that we’re seeing promising gains, including for students of color.”

“The hard work of America’s educators, families, communities and students is paying off. This is a vital step toward readiness for success in college and careers for every student in this country,” Duncan said in a statement. “While these gains are promising, we know that we have a long way to go in improving educational opportunities for every student — no matter their ZIP code — for the sake of our young people and our nation’s economic strength.”